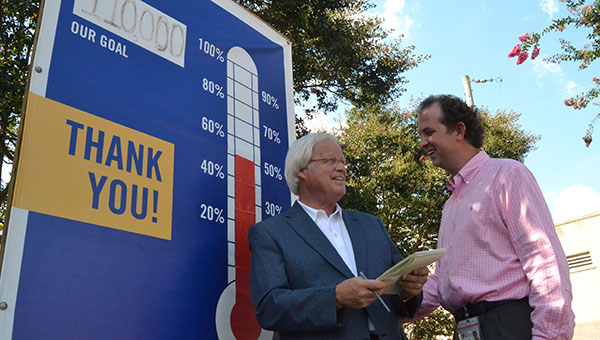 DAILY LEADER / RACHEL EIDE / Bill Sones (from left) and Jason Snider discuss plans for the local United Way fund drive. Sones is president of the United Way of Lincoln County board and Snider is the campaign chairman. As the “thermometer” in front of the Brookhaven-Lincoln County Chamber of Commerce shows, the campaign is 50 percent of the way toward reaching its $110,000 goal.

The United Way of Lincoln County is halfway to its $110,000 campaign goal for 2014, and local volunteers are making a full-steam push to bring in donations and make sure they can celebrate a successful drive when their work is complete in November.

“I doubt there’s anybody in our community that’s not touched by one of these agencies,” Sones said, adding that 99 percent of the money collected stays in Lincoln County.

Unlike many charitable organizations, United Way of Lincoln County has almost no administrative costs, Sones explained, noting that volunteers do the fund-raising work, and the minimal clerical work is handled through the Brookhaven-Lincoln County Chamber of Commerce.

United Way agencies must go through a rigorous process each year to qualify for United Way funds, Sones added. “You have to prove each year you should receive this money.”

Funding for the agencies is greatly needed, and a successful drive may be the difference between offering programs or not. “There’s a widespread need,” Sones said.

Donations can be made in any amount, and no gift is too small, Sones emphasized. “United Way is designed for widespread giving by a lot of people each giving a little,” he said.

In coming days, Snider, Sones and other United Way board members and volunteers will be visiting local businesses and asking them to allow employees to make payroll deductions for United Way. They’re also encouraging employers to match their workers’ gifts. “Some businesses match dollar for dollar,” Sones said.

“Every dollar counts,” Snider added. “But even if you can’t give, you can also give volunteer work.”

Those interested also can contact the chamber of commerce or any United Way of Lincoln County board member. In addition to Sones and Snider, board members include Garrick Combs, board secretary; Pam Cartwright, director; Kay Burton; Robert Byrd; Katie Nations; Korey White; Mike Whatley; Brooks Hall; and Brittany Nichols.