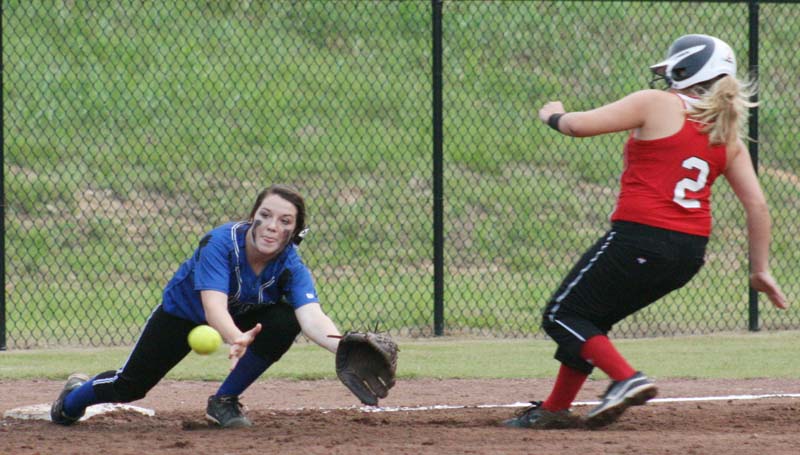 DAILY LEADER / MARTY ALBRIGHT / Brookhaven Academy shortstop K.K. Jordan stretches to make the play at third base before Trinity’s runner Kaitlyn Lees could reach the bag during the Thursday night in softball action at Brookhaven Academy.

“Our bats finally woke up,” said BA first-year coach Becky Flowers. “The girls started the contest a little tense up but managed to loosen up and hit the ball really well.

“Defensively, we played really well,” continued Flowers. “Olivia Lofton pitched really well and Alex Rae Smith did a great job in relief. Trinity has a very young team and they got some really good hitters that we had to respect.”

The Lady Cougars (2-2) will enjoy a night off before returning to the action Saturday as they prepare to for the Columbia Academy softball tournament. BA battles Newton Academy at 10:30 a.m., Wayne Academy at 3 p.m. and Presbyterian Christian School at 4:30 p.m.

The Lady Cougars and the Lady Saint provided an exciting defensive battle for their softball fans in the first three innings of action as BA managed to claim a 2-0 lead.

In the fourth and fifth inning, Trinity bounced back and took advantage of a few Lady Cougars’ errors to tie the game in the fourth and capture a two-run lead in the fifth.

In the bottom of the fifth inning, the Lady Cougars came out on fire as they put together a huge hitting clinic on the Lady Saints. They had a 13-run explosion to rally from behind and claim a 10-point mercy rule victory.

Alex Rae Smith pitched the win in relief for BA collecting one strikeout and only one walk. Olivia Lofton (1K, 1BB) was the starting pitcher for the Lady Cougars.

Kailey Hutchins suffered the loss for the Lady Saints with three strikeouts and four walks.

Kayla Gilmore was the top hitter for Trinity with a double and a single. Christi Ballard provided two singles. Michaela Hutchins and Kaitlyn Lees hit a single each.

Madi Smith was the offensive leader for BA with a triple and a single. Jessica Wallace and Covington hit safely. 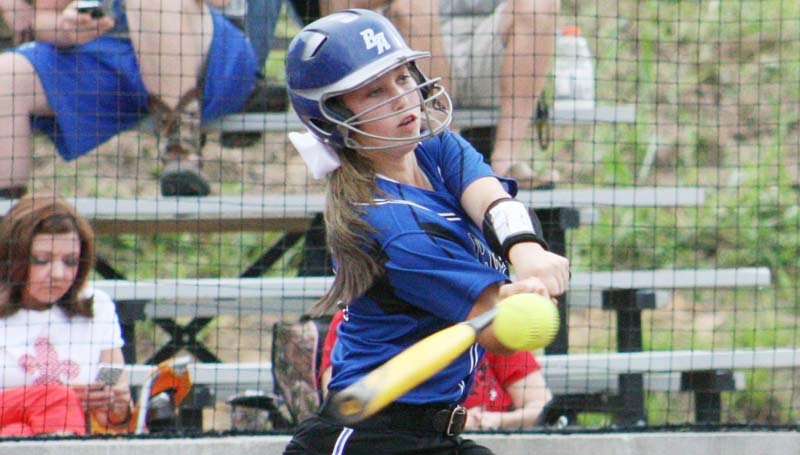