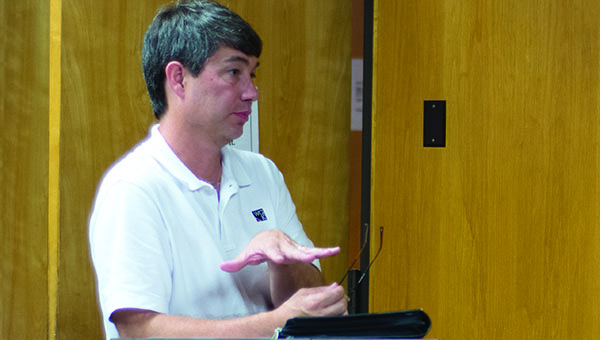 The smoke testing across the city has revealed several leaks in the city sewer. The smoke teams are wrapping up the final tests this week.

Mike Mckenzie, WGK engineer, said the large amount of leaks were expected and are typical of an older system. He added that once the testing is complete crews will work on mapping the leaks across the city, so they can begin the process of repairing the issues.

The color flags in the city mark the leaks and are color coded to signify the severity of each leak. They are intended to help with the mapping.

When McKenzie gave the report at the Board of Alderman meeting Tuesday, some of the aldermen were concerned about leaks and/or the smell of smoke in or around homes from the testing.

McKenzie said if a private residence had signs of a sewer gas leak, the owners will be notified by the water department.

At the alderman meeting McKenzie also discussed the repaving of Brookway Boulevard that will most likely be completed by Christmas. He said there will be disruption in traffic when the project begins, but during pre-construction conversations they will discuss minimizing the disturbance.

Other issues discussed at the meeting include:

• The construction on the Walgreens turn lane on Brookway Blvd is estimated to begin within a month.

• The board approved the acceptance of recycling equipment from Natchez as part of their DEQ Recycling Cooperative Grant. The equipment will work toward increasing Brookhaven’s recycling efforts.

• Terry Bates, Ward 2 alderman, commended the efforts of the public works department for their storm debris removal. At an earlier board meeting alderman Bates was concerned about the progress being made in his ward, but since then every call Bates made to the department was acted upon and his area has become significantly better.

• Ward 1 Alderman Randy Belcher and Ward five Alderman Fletcher Grice asked the board for their help to repair and pave roads in their wards.

Belcher said he knows no one on the board has to drive on the unpaved roads every day, so they may be unaware of the burden it puts on residence, especially after it rains. He asked for the roads to be matted and sealed.

Mayor Joe Cox said he has put a hold on some of the roads until they address the water and sewer systems.

Belcher said he will continue to bring up the issues at board meetings until it is addressed and his residents no longer have to work about getting to and from their homes on hazardous roads.

• Several business owners have been complaining to alderman about trees blocking their businesses and as a result the owners are trimming and cutting down trees on public property that have been paid for with government dollars.

Ward Four alderman Shirley Estes presented two grants to the board that will help pruning foliage on public property and planting trees.

Estes said the money will address the issues raised by businesses. She added they will try to be more diligent about where they will plant future trees.

• The board approved paying the $100 membership fee to remain part of the Tree City USA program.