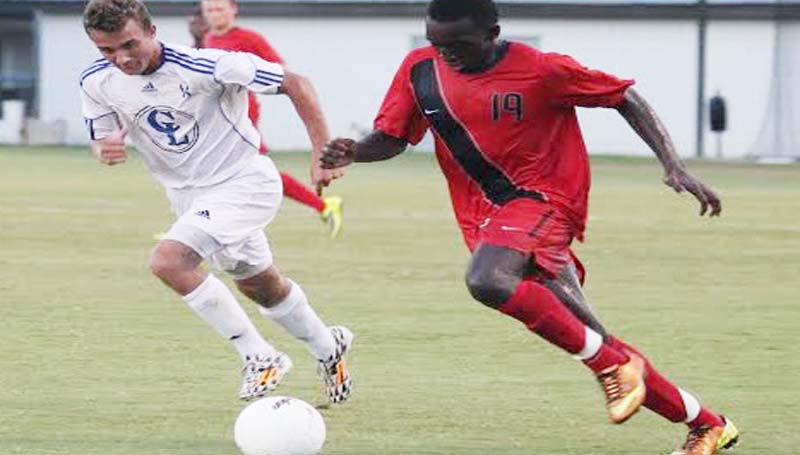 WESSON – For the second consecutive season the Copiah-Lincoln men’s soccer team opened their season with a thrilling win in front of the home crowd. Down 2-1 at the half, the Wolves used two second-half goals to earn a 3-2 win over the visiting Rangers of Northwest. In women’s action, spurred by four second-half goals, the Lady Rangers posted a 5-0 victory over the Lady Wolves.

Despite the score, the Lady Wolves got strong play in net from freshman keeper Destiny Allen. Allen, making her first career start in goal, made five first half saves to keep the game close for the first 45 minutes. The Lady Rangers scored once in the first half when Abigail Morales beat Allen from 18 feet at the 14:51 mark.

In the second half the Lady Rangers would get another goal from Morales to go along with goals by Tristan Kitchens, Brooke Lester and Jameka Barr.

Allen would make 10 saves for the Lady Wolves, but the Co-Lin offense would only be able to generate one shot on goal, compared with 15 by the Lady Rangers.

In 2013 the Wolves opened their season with an extra time win over East Central at home. The 2014 opener might not have been quiet as thrilling, but it gave the large Co-Lin home crowd reason to celebrate.

The game winner came with just under 16 minutes left in regulation when Aaron Guittererrez punched in a goal that began as a free kick by Foday Carr. The ball bounced in front of the goal and Guittererrez was able to beat Northwest keeper Josh Delgado.

The match started off badly for the Wolves as Northwest got a Mamadou Mbaye goal less than nine minutes in. Northwest would get another first half goal and would lead 2-1 at half.

The sophomore duo of forwards Logan Tassin and Camilo Posada would come up huge for the Wolves. At the 18:20 mark of the first half Posada scored by putting in the rebound off of a Tassin shot. Tassin and Posada would connect again in the second half when Posada gained the assist with a beautiful crossing pass that found Tassin in the box. Tassin would finish with a goal and an assist, as would Posada.

Freshman goalkeeper Bailey Hart would pick up the win for Co-Lin with one save.