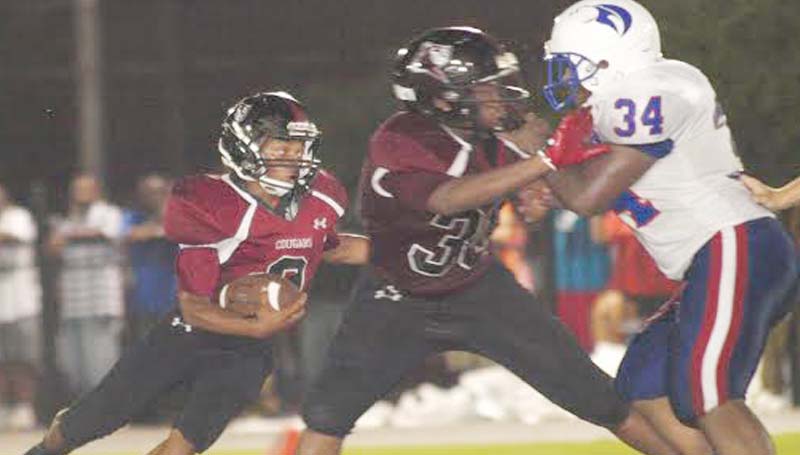 Quitten Brown rushed for three touchdowns and returned a kickoff for another as the Cougars cruised to a season-opening win. The LCHS defense forced eight turnovers from the Wesson Cobra offense.

First-year head coach Jaymie Palmer earned his first head coaching victory with the win. Palmer, an LCHS graduate and long-time assistant to former Brookhaven coach Tucker Peavy, took over from Herbert Davis, who moved to Madison-Ridgeland Academy in the off-season.

“We had a pretty good night,” said an understated Palmer. “I haven’t seen the film yet, but it looked like our guys played hard and executed reasonably well. I thought they handled opening-night nerves and pressure pretty well.”

For the second straight year, Lawrence County returned the opening kickoff of the season for a touchdown against the Cobras. This time it was Brown, a sophomore from New Hebron, who went untouched for 95 yards and a touchdown.

Shockingly, Lawrence County led 20-0 just five minutes into the game, having touched the football for only two offensive plays, and a kickoff return.

“We couldn’t have imagined such a start,” Palmer said. “We had to work to make sure we kept our guys focused and on task. We still had two and a half hours of football to play.”

It very nearly got worse for the Cobras before halftime. With 1:37 left in the half, Lawrence County’s Laderrick McCray returned a Kendrick Brown punt 55 yards for an apparent touchdown. However, deep in Wesson territory, a blocking-in-the-back penalty kept the Cougars out of the end zone.

Lawrence County’s would-be touchdown turned into a Wesson score on the very next play, when Wesson’s Frank Thigpen intercepted a Nunnery pass and raced 90 yards for the Cobras’ lone score of the night. It was 40-6 at the half.

The second half didn’t start off any better for the Cobras. An errant pitchout on the first play from scrimmage cost Wesson 21 yards and another turnover. It was recovered by Lawrence County defensive tackle Brandon Armstrong, and led to Quitten Brown’s fourth touchdown of the night, on a one-yard run.

This Friday, Wesson will host Sumrall, at Copiah-Lincoln Community College. Lawrence County will travel to King Field to take on the Ole Brook Panthers.