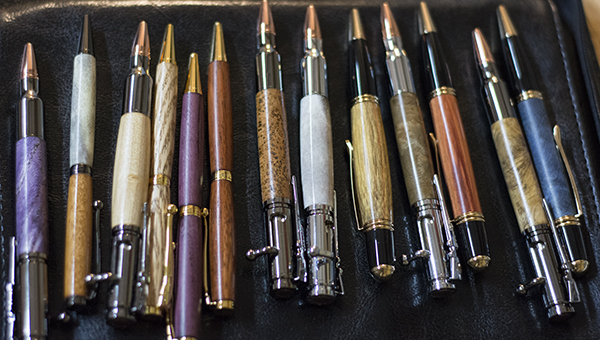 Artists can come in unusual packages. Kurt Vonnegut was a car dealer, Philip Glass was a plumber, Richard Serra was a mover and even the well-known southern literary genius William Faulkner worked as the postmaster at the University of Mississippi. Many local artists have day jobs as well.

The Lincoln County Sheriff’s Department is the workaday home to one of these hidden craftsmen. The evidence can be found jutting out from the front of Sheriff Steve Rushing’s shirt pocket. When asked to sign a form, he pulls out the rifle-like instrument, revealing a wooden-bodied pen with a rifle clip and bullet tip. The metal ends are interesting, but the finely smoothed, carved wooden body has a uniqueness to it that can only be hand made. 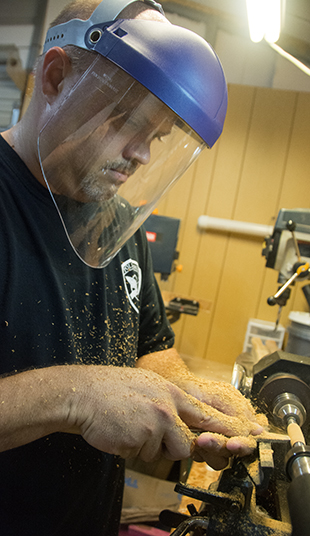 Sheriff Steve Rushing turns a pen on the small lathe in his home workshop Thursday night.

Last year, Rushing began turning slivers of wood, acrylic, deer antlers and even corncobs into one of-a-kind pens. He said it becomes a challenge to see what you can turn on the lathe.

“I cut ’em, drill ’em, turn ’em. Everybody needs a stress reliever. I’ve come to learn that, and this job has a good bit of stress,” said Rushing. “But this does not take away from my day job.”

After spending all day serving the community, Rushing retires to a small workshop behind his house to find some solace in a place he calls “God’s Country.” He chooses a block of wood from one of the piles of scraps he had collected from all over the county. He drills a hole though the center and outfits the space with a metallic shell. He places the block on his lathe and begins to create.

“I’ve always been fascinated with wood working and seeing what different things can be made out of wood. I’ve been working on projects here and there over the past several years. I never really had a whole lot of knowledge about turning, I just finally decided one day that I’d sit down and try it,” said Rushing. “I tried to learn from a couple of other guys who turn pens around here. Everyone has their own different styles.”

Rushing said began turning on the lathe after he heard about the work a friend in the courthouse was making. He said that he has always had a fascination with woodworking and works on various projects in his free time but pen turning has caught his attention.

“One of the best things is that you can take a piece of wood that is old that has some significance to somebody and you can make a pen out of it for someone to keep,” said Rushing. He explained that a woman came to him with a piece of wood from her family’s old home place that he used to make pens several pens. He said they were nothing fancy, but it meant something special to them.

In the workshop, Rushing turns on the machine and places a chisel against the prepared wood. He very meticulously shapes the wood into a tubular pen body with a slight bulge. After he works on the shape, he holds a fine grade sand paper against the wood until it creates a smooth texture. While it is still on the lathe, he adds several layers of a clear finish to the piece. Rushing said that some artist will use several coats of plain old super glue to seal the piece, but he uses a product he ordered.

Rushing has been serving as the sheriff of Lincoln County since 2006. He went to the University of Southern Mississippi for a degree in criminal justice. He had been working in the department for 10 years under two sheriff’s administrations prior to becoming sheriff himself. He is a life-long resident of Lincoln County and even received the title Region Two Volunteer of the Year 2011.

After Rushing lets the finish dry on the wood, he moves it the table where he assembles the pen. He uses kits that he orders from various websites to outfit the piece. Rushing then uses a vice to press the pen together. Then he lays the final piece on the table to see what needs to be tweaked.

The whole process takes about an hour and results in a beautifully made pen that would be a status symbol for anyone who is lucky enough to get his or her hands on one.

Some days he makes several at one time and other days he may not even go in to his workshop. The pens are usually given to family and friends, but sometimes he is commissioned by groups to make sets for special events or customers.

“I am by no means good at it, if you ask me, I ‘get by’ doing it,” said Rushing. “I’ve just developed over the years a fascination with woodworking.”

When Rushing finishes in the shed, he closes the workshop, heads inside his home and spends the rest of his free time with his wife and three children. 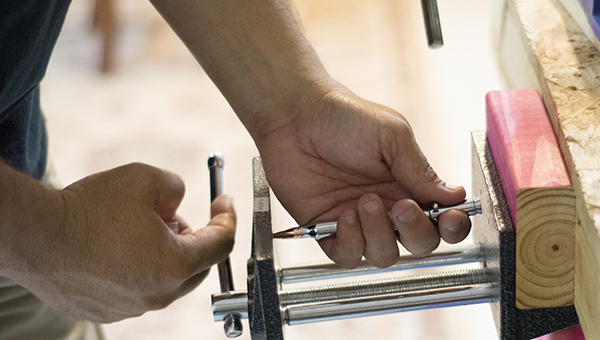 Sheriff Steve Rushing uses a vice to press the parts of one of his handcrafted pens together. 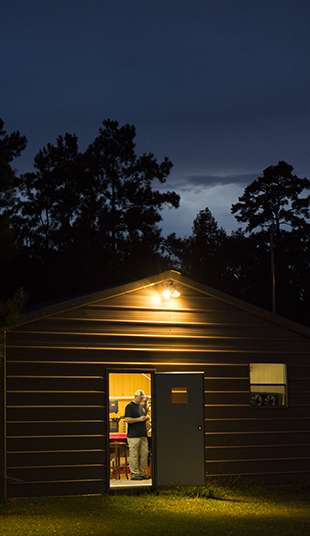 Rushing makes the one-of-a-kind pens in the workshop behind his home after he completes his workday in the Lincoln County Sheriff’s Department. 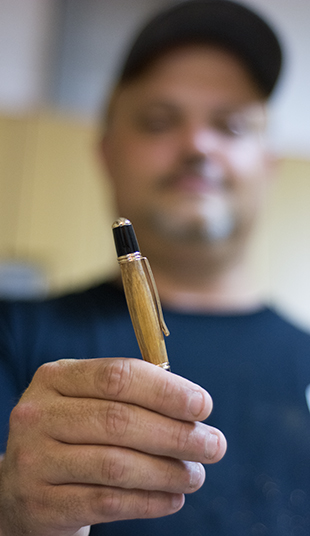 “I cut ’em, drill ’em, turn ’em,” he says. “Everybody needs a stress reliever. I’ve come to learn that, and this job has a good bit of stress. “But this does not take away from my day job.”