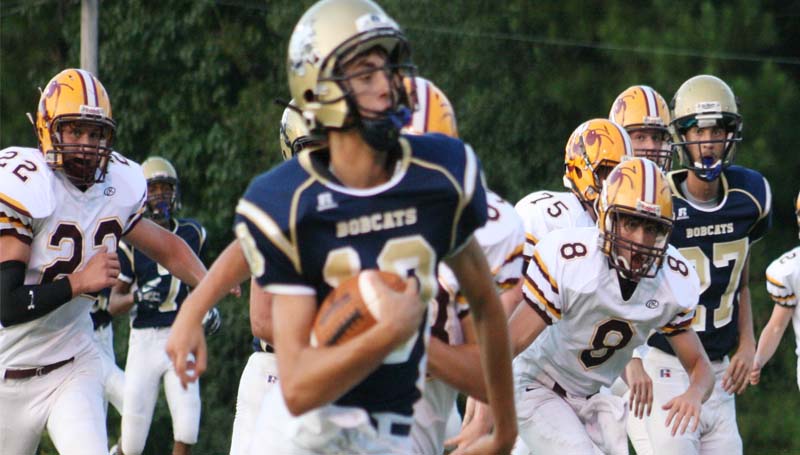 After all the offensive fireworks’ smoke cleared in a late contest, BC freshmen quarterback Tucker Lambert and his Bobcats spoiled Enterprise’s bid for a win with a 46-40 victory.

“Great game for both teams,” said BC coach Gareth Sartin. “I am proud of my guys for fighting back to win the game. Offensively, we did a great job passing the ball. Defensively, our guys stepped up and made the plays we need to earn the win in the second half.”

In the opening quarter, the Jackets came out and quickly set the tone of the game by scoring on their opening two-play drive as junior running back Braxton Thompson punched in a three-yard run and ran in the two-point conversion to give Enterprise a 8-0 lead with 11:06 remaining.

Bogue Chitto answered Enterprise’s challenge by scoring on their opening drive as Lambert finished the Bobcats two-play drive with a five-yard scramble to pay dirt with 10:29 left. Cameron Price finished the night three of three on the extra point kicks.

Lambert punched in his second touchdown of the game with 7:11 remaining on a one-yard plunge to BC the lead at 14-8.

Enterprise fought back to tie the game at 14-all late in the first quarter when Thompson cashed in a four-yard run with 2:31 left.

In the second quarter, the offensive fireworks continued as the Jackets managed to outscore BC 18-3 to lead at halftime 32-17.

Enterprise opened the second quarter scoring on a two-yard run by Trestin Grenn at the 10:39 mark. 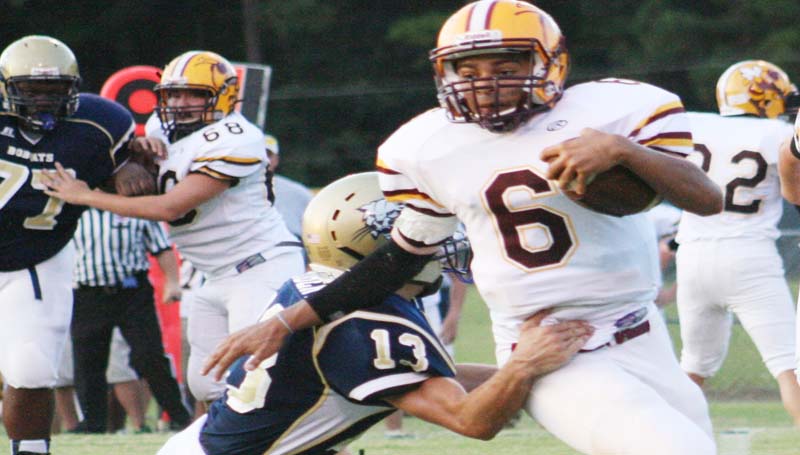 BC battled back to try to keep the game close, as they relied on their senior kicker Cameron Price to nail a 25-yard field goal with 4:18 remaining.

After defensive seesaw battle, the Jackets’ defense came through with a big play with 1:25 left as Ryan Amic recovered a BC fumble in the end zone for a touchdown.

On the very next play, Enterprise recovered an onside kick to setup another big scoring drive which was capped off by Tanner Waldrop sprinting in a 40-yard touchdown with 0:59 left.

In the second half, Bogue Chitto came out fired up as their defense turned up the heat on Enterprise and the Jacket to just 8 points. On offense, BC exploded scoring 29 unanswered points.

In the third quarter, Lambert rumble in a six-yard touchdown with 6:55 left.

Enterprise battled back to maintain their lead as Zach Hodges hooked up with Layne Brown for a five-yard touchdown pass with 3:38 left.

In the fourth quarter, BC’s offense and defense came alive as they shutdown Enterprise’s momentum as they hammered the Jackets with a 22-0 blast led by Lambert’s two touchdown runs of two and five yards. Lambert also connected with teammate Dee Dillon on a 37-yard touchdown pass with 4:28 to actually tie the game at 40-all.

“My guys came out and played hard for four quarters,” said Enterprise coach Brooks Burns. “This is a tough loss for us to swallow, but Bogue Chitto did great fighting back to win. Overall, I am really pleased with my guys’ effort.”

Lambert provided a career night in BC triumph over Enterprise, completing 33 of 40 passes for 346 yards and one touchdown, while rushing for 108 yards on 18 carries and scored five touchdowns on the ground. Dillon was BC top receiver with 19 catches for 238 yards.

Zach Hodges was Enterprise offensive leader completing three of six passes for 97 yards. Tanner Waldrop also had a great night completing one of two passes for 55 yards and ran for 63 yards on the ground on 12 carries.

The Bobcats (1-1) will resume action Friday as they prepare to travel to Natchez to take on the Natchez Cathedral Green Wave. Enterprise (0-2) will also be on the road next Friday as they visit Puckett. Both games starts at 7 p.m.