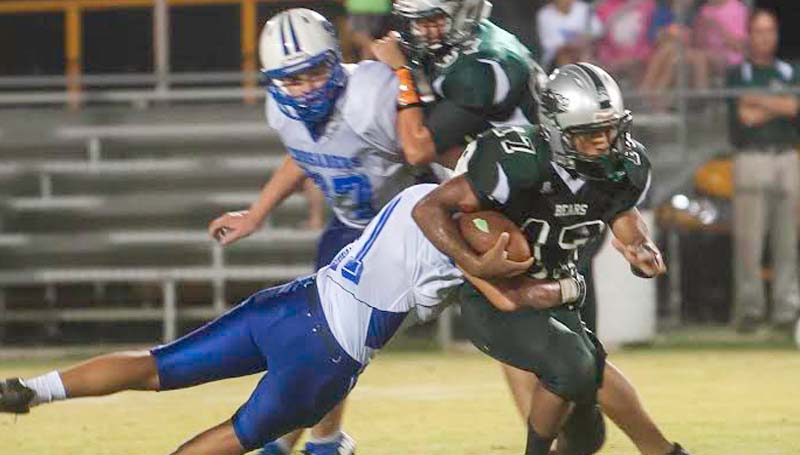 The West Lincoln Bears were led by Coach Willie Brumfield as they entered Perry Miller Field via The Bear Walk through the excited and supportive fans.

Victory was in the air Friday night at West Lincoln as the Bears scored the first points of the night and relied on their tough defense throughout the rest of the game to get their first win of the 2014 season with a 15-3 win over the visiting Sacred Heart Crusaders.

“I’m extremely proud of our kids, and they deserve the win,” said Brumfield. “Their hard work and dedication paid off tonight. They battled through adversity and fought hard till the end.

“We played sound football tonight in all three phases of the game,” continued Brumfield. “We had several guys that had to play different positions and they stepped up to the challenge. It’s a great day to be a Bear.”

The first quarter was a defensive battle for the Bears and Crusaders as neither team’s offense was able to break through the endzone.

Early in the second quarter, West Lincoln’s defender Liam Rutland recovered a Crusader fumble. The Bears marched down the field offensively but were stopped on the one-yard line.

Sacred Heart worked really hard to get the ball out of their territory but fumbled the ball on the 12-yard line which was forced by Lofton Sills and recovered by Chase Owen.

With 6:33 remaining and facing a 3rd and 1 with the ball on the three-yard line the Bears punched in their first point of the contest on a touchdown run by Ty Forman. West Lincoln lined up for a two-point conversion and was successful with a quarterback keeper by Ty Forman.

On the next possession, West Lincoln’s defense turned up the heat on Sacred Heart and stopped their potential touchdown drive, which the Crusaders settle for a 24-yard field goal attempt with one second remaining in the half to take the teams into halftime with West Lincoln leading 8-3.

After halftime, the Bears came out energized and stopped the Crusader offense with a three and out that forced them to punt.

West Lincoln continued their ground attack with running back Jade Use before breaking loose with 67-yard touchdown sprint by quarterback Ty Forman. A successful PAT by Bryce Temple advanced the score to 15-3.

Sacred Heart’s offense was pinned deep on a kick by Lofton Sills and on second down Bryce Temple grabbed an interception.

In the fourth quarter, junior quarterback Jayden Rushing directed the Bears against a strong defensive front of the Crusaders. Both teams continued to battle to put points on the scoreboard but were held scoreless in the fourth quarter.

Offensively, West Lincoln amassed 300 total yards, which was directed by Ty Forman’s 121 yards. Jade Use contributed to the ground attack with 102 yards.

The Bears (1-1) will be searching for their second win next week as they again play for the home crowd at West Lincoln hosting Cedar Ridge High School from Arkansas.