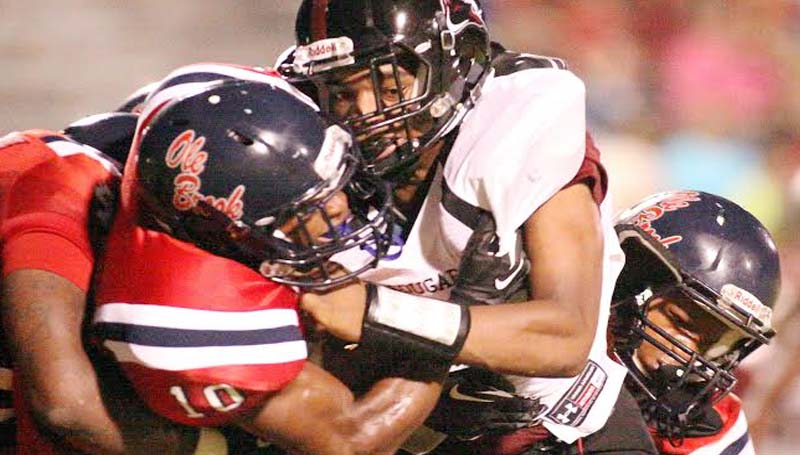 MONTICELLO – Treviaunte McDaniel rushed for 181 yards and four touchdowns as the Brookhaven Panthers defeated the Lawrence County Cougars 27-19 in high school football action Friday night at King Field. McDaniel scored a touchdown in each quarter as the Panthers held off a stubborn upset challenge from the Cougars.

With the win, Brookhaven improved to 2-0 on the young season. Lawrence County, under first-year coach and former Brookhaven assistant Jaymie Palmer, fell to 1-1 on the campaign.

“I’m glad it’s over,” said a drained Tommy Clopton. “Our kids played hard and didn’t ever let up. Both teams gave great effort and played it to the end. It was an exhausting ballgame.”

Clopton’s Ole Brook Panthers rushed for a whopping 377 yards on 43 carries. However, Lawrence County managed to stay in the game, thanks to Brookhaven’s 3 lost fumbles. One of those fumbles was returned for a Lawrence County touchdown. 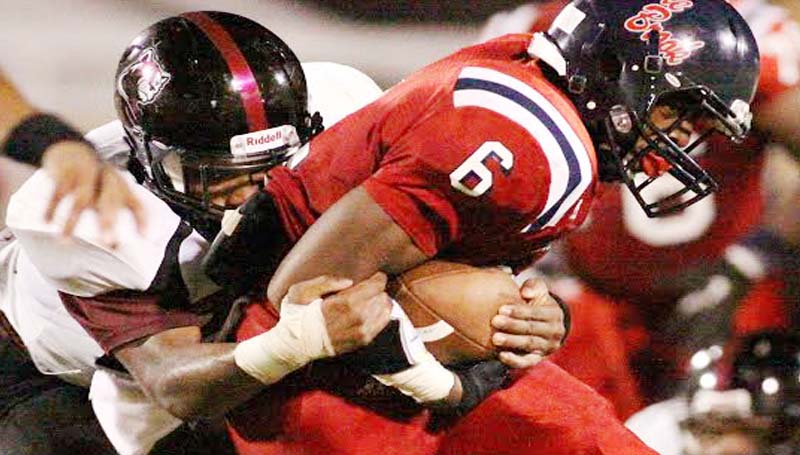 DAILY LEADER / JONATHON ALFORD / Brookhaven running back Tre McDaniel (6) holds on to the ball as Lawrence County defender T-Tex Cole bring him down.

Along with McDaniel’s big night on offense, Brookhaven also got an effective effort from its defense. Though Lawrence County had some offensive success in rolling up 307 yards of total offense, the Panther defense twice stopped the Cougars on downs deep in Brookhaven territory.

After the Ole Brook defense made those two stops, the Panther offense – led by McDaniel – quickly dashed down the field for touchdowns. Those Brookhaven scoring drives, on the heels of missed opportunities for the Cougars, proved the difference in the game.

“Obviously, I would prefer to have won the game,” said Palmer, who earned a state championship ring as an offensive coordinator at Brookhaven, “but I’m proud of the effort our guys gave.

“We missed some opportunities that we had, and our execution could have been better at times, but I thought this was a positive night for our team, and our program. I loved the way our guys battled to the bitter end.”

The game opened with impressive touchdown drives by both teams. First, the Panthers went 70 yards in 9 plays. A 39-yard run by Ken’Quavious Boyd set up the first of McDaniel’s 4 touchdowns, a 4-yard run. Tyler Mixon kicked the extra point.

Lawrence County responded with a 48-yard march that was set up by Quitten Brown’s 38-yard kickoff return, and a 30-yard run by quarterback Charl’Tez Nunnery. Brown scored from 3 yards out, but LCHS missed the extra point.

Lawrence County defensive tackle Brandon Armstrong handed the Cougars their only lead of the night early in the second quarter. Armstrong stripped Boyd of the football, scooped it up and raced 41 yards for a touchdown. The Cougar PAT attempt was blocked. LCHS led 12-7.

Late in first half, the Ole Brook defense came up with perhaps the stop of the night, stopping Lawrence County’s T-Tez Cole on fourth-and-2 at the Panther 6-yard line. It took the Brookhaven offense just two plays to go 94 yards. First, Boyd got the Panthers out of a hole with a 16-yard run. Next, McDaniel dashed 78 yards for the lead touchdown. Instead of enjoying a 2-touchdown lead, Lawrence County found itself behind 14-12.

“That was a big sequence,” Coach Palmer said. “If we could have finished those drives, we’d have likely won the game. Let’s give the Brookhaven defense some credit. They’re a tough group to run the ball against.”

The second half started with a similar sequence. Lawrence County plodded down the field with a 20-play drive that burned up two-thirds of the third quarter. However, the Cougars were stopped on downs at the Brookhaven 12-yard line. An unsuccessful fake field goal attempt ended the threat.

Again, the Panther offense took advantage of the defensive stand with a long scoring drive. BHS went 88 yards in 7 plays, all on the ground. McDaniel’s 11-yard run gave Ole Brook a 21-12 advantage.

Brookhaven seemingly put the game away with McDaniel’s 2-yard plunge midway through the fourth quarter. That made it a 27-12 game.

Lawrence County had one last shot to fire. Facing fourth-and-7 at his own 12-yard line, Nunnery hit Quitten Brown for 29 yards and a first down. On the next play, Nunnery tossed a short pass to T-Tez Cole, who raced past the Panther defense for 56 yards and a touchdown. Joshua Stephens’ extra point got the Cougars to within 8 points, at 27-19.

Brookhaven had to secure an on-side kick to secure the Panthers’ second win of the season.

Along with McDaniel’s big night, Boyd rushed 11 times for 109 yards. Quarterback Jon-Mark Mathis gained 51 yards on 9 carries, and he completed 2 of 4 passes for 20 yards.

Along with Armstrong and Pittman, Rykendrick Harness had a fumble recovery for the LCHS defense.

This Friday, the Ole Brook Panthers will take to the road for the first time, playing at North Pike. Lawrence County will return home to face Crystal Springs.