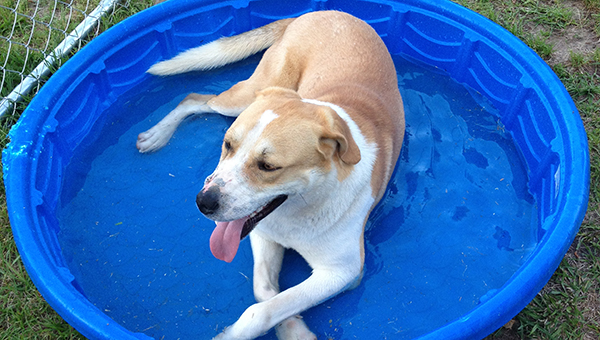 PHOTOT SUBMITTED / Belt Line Buddy relaxes in his kiddie pool during the summer.

Belt Line Buddy, the severely injured stray dog whose rescue earlier this year made him the talk of the town, died Tuesday morning, according to Missy Thames, who wound up taking him home after his initial medical treatment.

Thames was one of several people who began leaving food out for the shy stray after catching glimpses of him on Belt Line in 2013 and early 2014, but the dog was always was too skittish to get close enough to come home with anyone.

After feeding the dog for about a year, Thames noticed he disappeared for awhile last fall and then when he showed up again early this year, she could see he was severely injured. “… The side of his face was ripped off – just gone,” Thames said in a Daily Leader story published March 20. 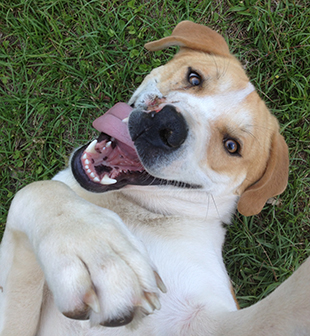 PHOTO SUBMITTED / Belt Line Buddy smiles for the camera in a recent photo provided by Missy Thames, who helped rescue Buddy and went on to adopt him earlier this year.

Despite his severe injury, Buddy was still too shy to let anyone come up to him, but Thames contacted friends at Brookhaven Animal Rescue League who were able to provide antibiotic-laced meat, which Buddy ate. Meanwhile, everyone tried to figure out how to catch him and get him to a veterinarian.

Then Quinn Jordan, manager of the Lincoln Civic Center, provided a safe trap, Buddy was captured and then taken to Brookhaven Animal Hospital. X-rays showed Buddy had been shot. “He had pellets in his face,” Thames said in the March story this year. “… Apparently someone shot him point-blank in the face.”

After Dr. Kristy Ferguson performed surgery at the animal hospital, Buddy went home with Thames, where he lived comfortably for the past five and a half months, enjoying jumping into his backyard kiddie pool and more often than not, climbing over the fence in his dog pen. Buddy was so good at scaling the fence, Thames was putting a top on the pen.

Then a couple of weeks ago, he started having health problems, Thames said.

“About two weeks ago, a spot came up on the other side of his face from where he was shot,” she said. She took him to the animal hospital and got him treated and he got better.

Then last week, he started limping, and Thames took him back to the vet. “They thought he had an infection,” she said, so he was treated again and came home.

“Then Sunday, he started panting and turning food away,” Thames said. She was still able to get him to take his medicine by wrapping it in food, but that little bit was all he would eat, she added. Then Buddy’s gums turned pale.

“I called Dr. Bob (Watson),” Thames said, and he met her and Buddy at the animal hospital.

By Monday, Buddy’s condition had worsened, and on Tuesday morning, he passed on, Thames said. She thinks Buddy’s immune system, which had been weakened by the earlier injuries, just wasn’t strong enough to keep on fighting long enough to keep him going through this last battle.

Thames expressed appreciation to Watson and Ferguson and the staff of Brookhaven Animal Hospital, for all they did for Buddy.

Because of Labor Day, the Lincoln County School District Board of Trustees met Tuesday instead of their normal Monday meeting.... read more