No action taken on request for county to handle 911 calls 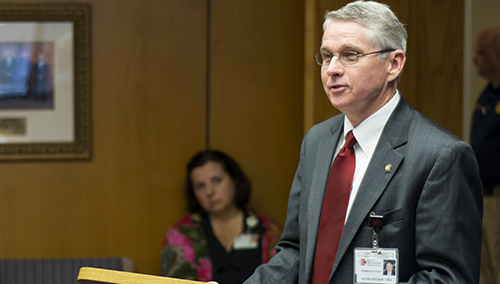 In an effort to be in compliance with national codes and to better serve the Lincoln County Community, King’s Daughters Medical Center Chief Executive Officer Alvin Hoover asked the Board of Supervisors Tuesday to take over the 911 ambulance dispatching services.

“When someone calls 911 they should get a trained operator who will stay on the phone until the issue is resolved,” said Hoover. “It made sense to ask the county to pick up the dispatch 24-7.”

Hoover asked the board of supervisors to have the county take over the entire dispatch service, which would require hiring one or two more employees. He added that since the county already has the 911 consoles, that it would make sense for them to pick up all 911 calls, instead of having the hospital hire three or four more employees and buy the equipment to field the calls 24-7.

“Most rural communities struggle with this issue,” said Hoover. “Brookhaven and Lincoln County are better than most places, and a centralized 911 service would fit our community.”

The supervisor chairman Eddie Brown said he had concerns about the government getting involved in medical services. He added that he does not think a non-medical person should be fielding those calls.

Hoover said that a dispatcher does not need to be a medical professional, they just need to follow the national comprehensive guidelines laid out in the dispatcher handbook and training. He added his proposal would be more effective and cost efficient.

Brown was not in favor of the proposal. He added that the board does not want to raise taxes and is stretched thin as is, so they can not afford to take on the additional finances that would be required to have a 24-7 medical dispatch service.

“We are falling short on issues and we are getting in desperate shape here. It’s tough all over,” said Brown. “We want to see the hospital grow and prosper, but taxes don’t go as far as they used to.”

Hoover noted that last year KDMC was one of the 90 percent of hospitals to lose funding, so they are also not in a good position to take on the job.

The supervisors were also asked to help finance the purchase of a new box ambulance. The vehicle would allow for more health professionals to ride on emergency runs, including nurses or respiratory therapists.

The supervisors will address the issue of how much they are willing to contribute to the new ambulance at a later time. It was also brought to the attention of the board that the city is not contributing any money to the ambulance purchase.

The supervisors took no action on Hoover’s 911 services request nor did they make any plans to take it up again later.

Other action at the board meeting Monday included:

Tucker said she would be meeting with government officials and local community leaders to assess the needs of Brookhaven and Lincoln County, to help in both private and public sectors.

“I am delighted to be here in Brookhaven and Lincoln County working with you,” said Tucker to the Board of Supervisors. She added that as she gets to know the community better, she can begin to help with things such as helping build better websites for businesses.

Ledet reported that over the past year there has been an average of 307 people who use the library per day; there are 25 public computers, three of which are for children; they are adding electronic magazines to their collection of electronic books; there is a high use of the free wireless internet service; they have completed the children’s area; the friends of the library have raised over $20,000; and they have been enjoying the recently added movie projector.

“We are really excited about what has been going on,” said Ledet.

The supervisors also approved the request for Will Allen to begin a regular term on the library board.

• The board also approved the addition of two subcontractors for the bridge work being done on Big Creek. Oddee Smith Construction and American Field Service will be assisting in the construction process.

• Supervisors also discussed that they will be taking bids on Sept. 15 for a series of paving projects that include the library parking lot, Johnson Grove, Hurricane Lake and various other roads in several of the districts.

The projects may also include the intersection of California Road NW and Hilltop Lane NW because of drainage issues on private property surrounding the area.

• Lincoln County attorney, Bob Allen is in discussions with the city about the new dog ordinance enforcement in the county. Allen is hoping to negotiate the use of the city’s dogcatcher and facilities for the county.