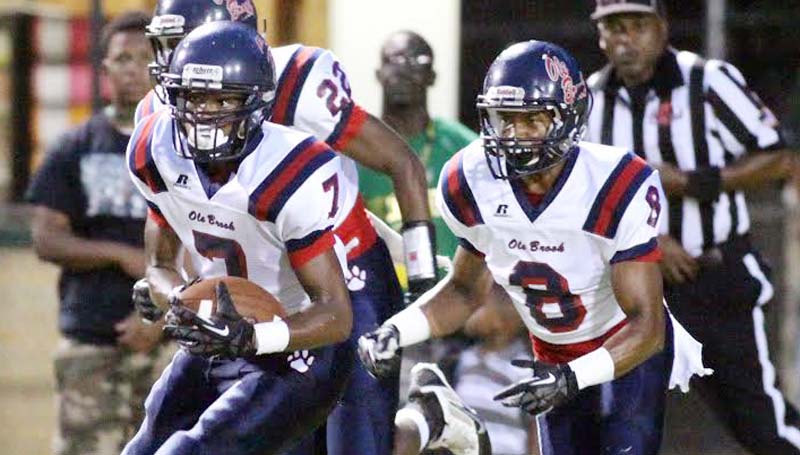 MCCOMB – The Brookhaven Panthers and the McComb Tigers provided another exciting battle in Mississippi’s longest high school rivalry Friday night, which currently stands as their 96th meeting. The Panthers relied on their tough defense and clock management to escape with a 34-27 victory over the Tigers at CC Moore Stadium.

“This was a heck-of-a-game,” said BHS coach Tommy Clopton. “We started the game off strong and relied on our defense to frustrate them offensively. We knew coming in that McComb has some great skilled players, and we needed to keep them in check.

“Overall, I was very pleased with my guys effort,” continued Clopton. “The guys did a great job fighting until the very end. The coaches had a great game plan coming in, and our guys worked hard to execute it. This was a good win as we start getting ready for our district run.”

On the Tigers’ next possession, McComb tried to answered Ole Brooke’s challenge with a deep pass down the field to score quickly, but Brookhaven’s Alex Benson denied the opportunity by intercepting the pass and returned it 81 yards to pay dirt with 7:42 left. Tyler Mixon finished the night successfully kicking four-of-five extra point attempts. 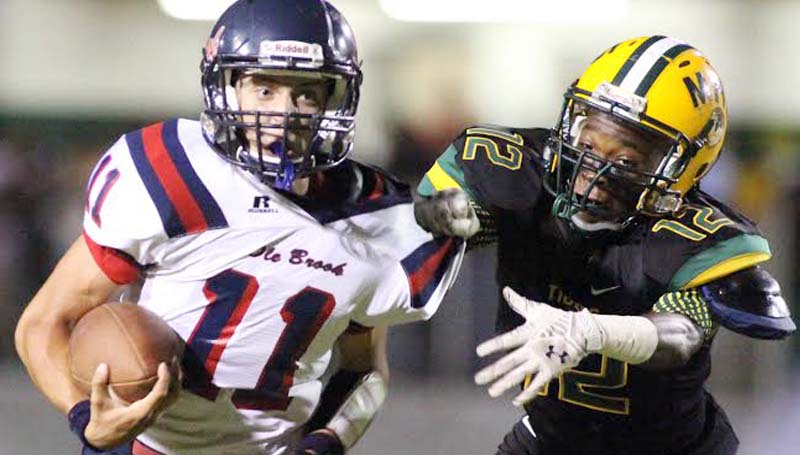 The Panthers and the Tigers continued to battle back-and-forth throughout the rest of the quarter as Brookhaven commanded a 13-0 lead as the first quarter ended.

In the second quarter, the heated rivalry started to get more exciting offensive as both teams scored 14 points apiece.

Brookhaven’s senior running Tre McDaniel scored first after plowing through to punch in a three-yard run with 8:51.

McComb finally managed to break through Brookhaven’s defense get on the scoreboard with 3:29 left, when Jaquarius Landrews scramble in a two-yard run. D’Marion Jones was successful on the extra-point kick and finished three-of-four on the PAT.

The Panthers quickly answered on their next drive to increase their lead back 20-points, when junior quarterback Jon-Mark Mathis connected with Shaquan Richardson on a 66-yard reception for a touchdown with two minutes remaining.

The Tigers bounced back and scored the final points of the first half, when Kenyetta Addison barreled through BHS defense to punch in an 8-yard run with 29 seconds left. Brookhaven lead at halftime 27-14.

In the second half, McComb came out fired up and quickly marched down the field to cut into Brookhaven’s lead and scored on a two-yard run by Vencheza McCray with 9:46 remaining in the third quarter.

After a defensive see-saw battle throughout the remainder of the third quarter, Brookhaven managed to capitalize on McComb’s defensive miscue to advance the ball inside the 10-yard line and later cashed it in on senior linebacker Leo Lewis’s 5-yard run with 1:35 left.

McComb would quickly answered with another quick score before ending the third quarter as Dequan Smith sprinted 59-yards to pay dirt with 43 second left.

In the fourth quarter, Brookhaven and McComb provided their fans with some great mouth defensive football as both teams offense struggle to score. The Panthers used great clock management to milk the clock and control the ball offensively. When McComb’s offense had the ball Brookhaven’s defense stiffened up to make the Tigers make poor decisions, which back them up on several attempts.

“We knew this was going to be a battle until the very end,” said McComb coach Malcolm Jones. “Brookhaven took it to us early, and we did not respond until late in the contest. Overall, we made to many costly mistakes offensively and defensively. We definitely did not play our best ball tonight.”

McDaniel powered the Panthers offense with 183 yards rushing on 27 carries and two touchdowns. Jon-Mark Mathis completed four-of-seven passes for 120 yards and a touchdown, while rushing for 66 yards on six carries. Shaquan Richardson led all receivers with three catches for 101 yards.

Brookhaven will enjoy an open date this week as they start to prepare for their region opener. The Panthers return to action Friday, Sept. 26, on the road against the Laurel Golden Tornadoes. Kickoff is at 7 p.m.