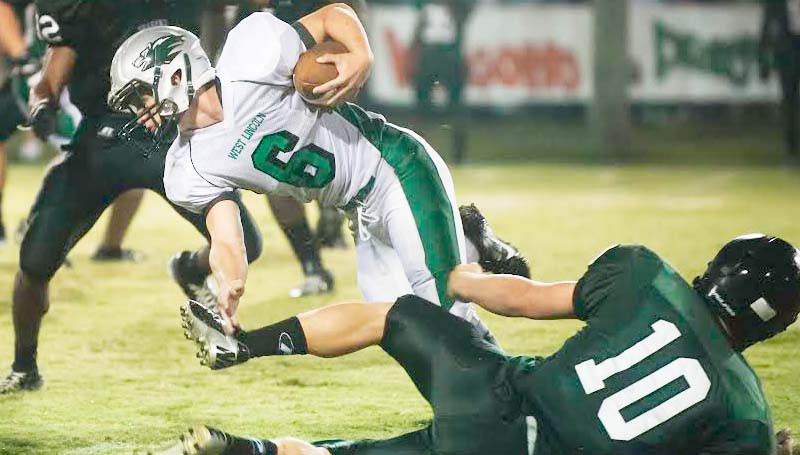 SANDHILL – The West Lincoln Bears traveled to Sandhill Friday night to battle the Dragons of Pisgah High School in a non-divisional contest. The Dragons ended up torching the Bears to claim a 49-6 victory.

In the first quarter, the Bears (2-3) had trouble stopping the running game of the Dragons as they quickly took command on the contest by securing a 21-0 lead after one quarter of action.

The Dragons would continue to pound it through the middle of the West Lincoln’s defensive line and secondary during the contest to collect six rushing touchdowns.

Coach Willie Brumfield responded to the outcome after the game “Well it didn’t turn out like we wanted, but we did see a lot of good things tonight that we can build on. Several young kids stepped up and made key contributions. These kids never quit, and that leads me to say this: I want everyone to know how proud I am of these young men on this football team. They come out every day and I work their rear-ends off and they do everything I ask them to do.”

Pisgah collected 334 all-purpose yards including 282 yards on the ground and 27 yards in the air. The Dragons had six rushing touchdowns and a fumble recovery that was returned for a touchdown.

Defensively, the Dragons fired away at West Lincoln’s offense causing three fumbles, two sacks and 10 tackles behind the line of scrimmage for lost yardage.

The Bears would rest running back Jade Use in the second half after taking a hard hit to the ribs in the first half. Senior Kodie Carroll would step up to lead the Bears rushing attack 12 carries for 56 yards. West Lincoln collected 255 all-purpose yards including 46 carries for 223 yards. Jayden Rushing contributed eight rushes for 53 yards.

Near the end of the fourth quarter the Bears were able to get six-points on the scoreboard on a quarterback keeper by Ty Forman led by a block by Lofton Sills.

“A lot of times we look at the final score on the scoreboard to determine success and tend to lose sight of the big picture,” stated Brumfield. “We don’t see what these kids are doing on a daily basis to become great men. I guarantee you that each and every one of these guys on this football team are going to be great husbands and fathers after they graduate from West Lincoln and move on to the next chapter in their lives. I’m proud of each and everyone of them.”

“I challenge all the Bear fans to come out next week and support your team and show your school spirit as we get ready for homecoming this Friday. Show your Bear Pride, enjoy the festivities and support this fine group of young men and help us wrap homecoming in green and white. And yes, you should know it is truly a great day to be a bear!” replied Coach Brumfield.

The Bears will welcome the Union Christian Academy Lions to Perry Miller Field next Friday for homecoming starting at 7 p.m. The homecoming court will be presented during halftime.