African artifacts on display at Inez 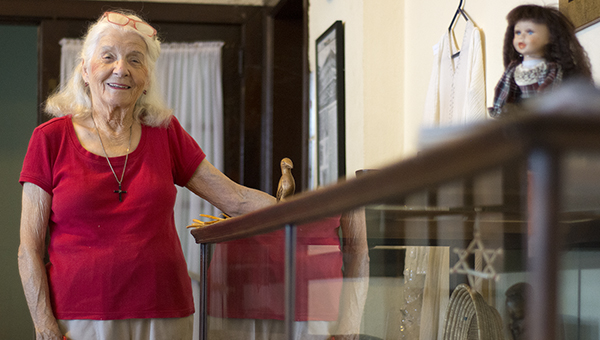 DAILY LEADER / KATIE WILLIAMSON / Betty Barham stands next to the case with all her mementos from her mission work in Africa.

In the lobby of the historic Inez apartment building is a glass display case filled with trinkets and treasures from various African countries. It contains everything from ebony figurines to finely woven fabrics. The items were carefully chosen by Betty Barham, (or mama Betty as the Africans referred to her) to illustrate her eight years of missionary work.

Barham worked as a nurse in the countries, ministering to the sick and starving. She was sent to the country through the Southern Baptist International Mission Board in the mid 80s.

“I heard a lot about the famine going on at the time and about people dying left and right,” said Barham. “I couldn’t stand it; I had to go. I’d go again today.”

More intriguing than the figurines and knick-knacks are the hundreds of photos she has to accompany them. Barham sat in the lobby of the apartment building with stacks of photos of her travels. She thumbed through the pictures, explaining the memory that accompanied each.

One of her photos depicted a little pool of water the missionaries built that had just enough room to completely submerge a person for a baptism.

“We took the word of God to people who did not know it,” said Barham. 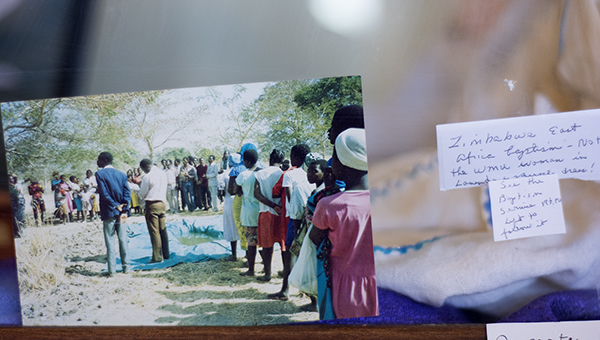 A picture of the baptism pool used in Africa. It is on display at the Inez Monday.

The group converted dozens of men, women and children to Christianity.

Barham traveled the continent working as a nurse. She helped deliver babies, gave prenatal clinics, worked as a hospice, gave food and water and helped treat various ailments from infections to leprosy.

“We ministered to the sick and tried to save people, but they were still dying right and left,” said Barham.

In Ethiopia alone there were hundreds of thousands of deaths related to the famine in the early 80s. The lack of medical care also resulted in many preventable fatalities.

Barham pulled out more photos from her stacks. One of them showed a girl she helped with a splinter that was wedged in her leg, another was of three boys sick to their stomach.

“If I hadn’t been there, they would have died,” said Barham.

She pulled another photo from the stack that showed her office at the time. It was a metal-sided shack that functioned as her clinic. She also showed the rickety church where they worshiped.

After Barham was finished with the stacks of photos, she began describing the items in the display case: ebony sculptures of the nativity, pieces of frankincense, dolls, finely woven dress and various other sundries. Each item had a specific memory and personal meaning for her, some of which are written on cards next to the items.

Barham’s collection will be on display for several weeks in the Inez. 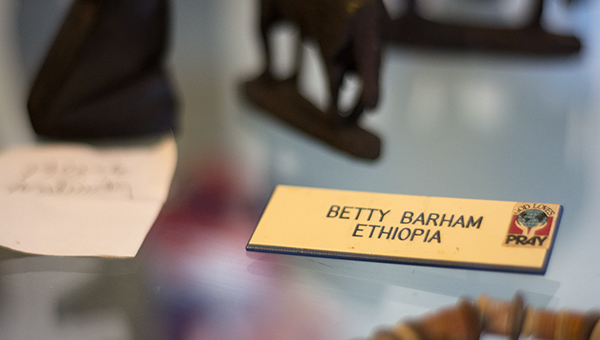 Displayed is her name tag from Ethiopia, which was one of the many countries Barham worked during her eight years as a missionary.