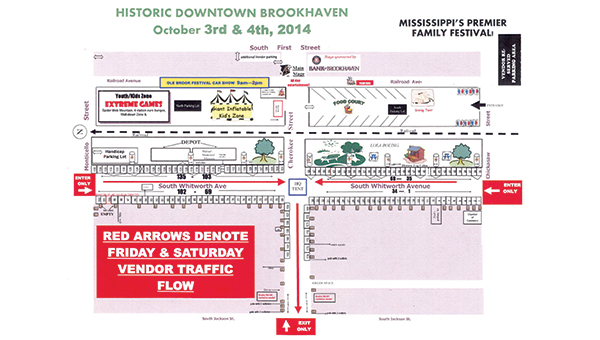 MAP SUBMITTED / The festival committee plans to close off streets beginning at 5 p.m. Friday, Oct. 3. The festival will run through Saturday.

One of the biggest events for downtown Brookhaven is right around the corner. Scheduled for Oct. 3 and 4, this year’s Ole Brook Festival will host everything from food, vendors, youth activities and entertainment.

The committee, organized through the Brookhaven-Lincoln County Chamber of Commerce, is hard at work to make this year’s festival safe and fun for the whole family.

The entertainment schedule has not been finalized, but some of the headliners will include Andy Cotten, Clementine and Cole Powell and the Revivals. Entertainment will also include representation from Mississippi School of the Arts, as well as several other acts.

Although the stage will not be set up yet, low-key entertainment will be performing in front of Brookhaven Music and Sound on Friday night.

The Ole Brook Festival Car Show will run from 9 a.m. to 2 p.m. Saturday. The cars will be located on Railroad Avenue from Cherokee to Monticello streets.

A 5K Walk/Run will be held to raise money for MSGirls4acure. The run will begin at 7 a.m.

The committee has stressed the importance of people respecting the barricades at the end of each street. Last year, some people moved the barricades out of the way, and the committee is currently working on a plan to prevent such activities this year. Kay Burton, marketing director of the Chamber, said traffic within the barricades will be ticketed by the Brookhaven Police Department.

For more information on the Ole Brook Festival, visit brookhavenchamber.org or contact the Chamber at 601-833-1411. All registration forms for vendors, the 5K and the car show are available at the Chamber’s website.