Caroleah Brister is a triple threat at Copiah-Lincoln Community College. She is an athlete, homecoming queen and student. 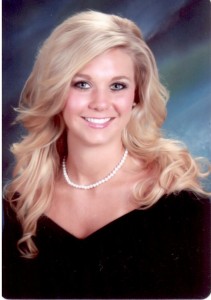 “She is an outstanding student leader on campus,” said Co-Lin Director of Public Information Natalie Davis. “She is very involved, and everyone knows her. She will always volunteer for anything we ask of her.”

Brister is a sophomore at Co-Lin and is majoring in marketing.

“Getting involved is a big thing for me. It helps you get more scholarship opportunities, which helps out parents,” said Brister.

Brister is on the Co-Lin tennis team, an officer in Phi Theta Kappa honors society, a Trailblazer student ambassador and part of Phi Beta Lambda business organization on campus. Last year she was crowned most beautiful, and this year she won homecoming queen.

While her academic club involvement prepares her for the future, tennis has been a way for her to make new friends. She said being on the team has been one of the highlights of her time at Co-Lin

Bristers days a jammed packed of activities. She said being involved is all about time management and planning ahead.

“Co-Lin gets you ready for the next level,” said Brister. “I’m so glad I chose to go here.”

The next event for Brister will be a traveling lemonade stand at Co-Lin that will raise money and bring awareness to spina bifida, a developmental disorder, which can leave children paralyzed from birth.

“When my mom was pregnant with me, they told her I would have spina bifida,” said  Brister. “Every test said I was positive for the condition. Doctors gave her the option to terminate the pregnancy, and she didn’t, and when I was born, I came out fine. All I had was one little scar on my spine.”

Brister said that her mother’s prayers were answered.

DAILY LEADER / JULIA V. PENDLEY / Brookhaven Milling has served the community for over 60 years. Its expansion will... read more