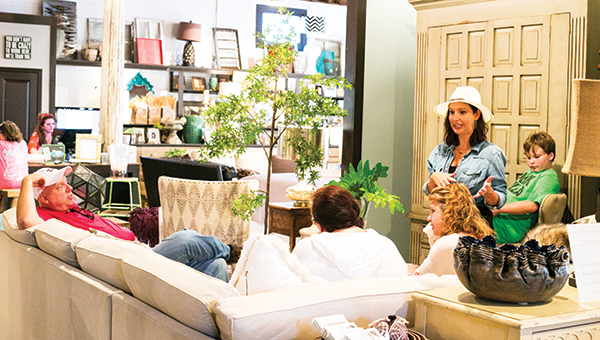 Photos by Kaitlin Mullins
Katie Nations of J Allan’s (above) talks with customers about furniture choices. (Below, from right) Renee Skinner, Kathy Waycaster and Mary Camille Waycaster enjoyed browsing through the store, which was one of many popular destinations during Girl’s Night Out Thursday night. The event drew over 1,300 shoppers to Brookhaven’s retailers and restaurants to take advantage of special promotions, sales and giveaways.

More than 1,300 shoppers descended upon Brookhaven’s specialty stores and restaurants Thursday night during the annual Girl’s Night Out. The shopping event featured exclusive sales, door prizes and drawings as well as a fun time on the town for participants.

Parking lots all over town were filled and pink Girl’s Night Out T-shirts could be seen dotting the crowds as locals and travelers alike enjoyed the event. Some participating merchants offered snacks and refreshments such as pink lemonade, water, cookies and cupcakes to their visitors. MAJIC 104.3 FM had a photo booth with fun props for participants to create a keepsake while entering their $500 cash giveaway.

Kay Burton, Brookhaven-Lincoln County Chamber of Commerce program director, said the event was the best one yet with a phenomenal turnout. More than 60 door prizes were given away, which Burton said was a great time, as always.

Burton said more than 1,300 tickets were sold for the event, up from the 1,140 tickets sold last year. Burton said she received positive feedback from each merchant and retailer she spoke with during the event, and that so far it looks like the whole thing went off without a hitch.

“Everybody was pretty happy, anytime you bring that many people to shop in one night it’s going to be great,” Burton said. “The coupon books were better this year because everybody kind of knew how to better market themselves, and I think everyone was really pleased.”

Burton said there were a great deal of visitors from out of town, but the majority of shoppers were from the local area.

“I think everybody had a good time; they loved the fact they had coupons to use later,” Burton said. “The whole thing is a win-win for the community; it’s a win-win for our merchants and shoppers as well. It sort of touches every group and people just love the fun aspect of it. Shopping after hours, seeing everybody out and seeing how many stores you can get to, its a lot of fun.”

Representatives from many stores said they received record day sales and tons of foot traffic. J Allan’s, The Finishing Touch, Engravables, Judy’s II, Touch of Sass, Southern Flaunt, Beyond the Rainbow, Expectations and Expectations Too and Detour 51 experienced a non-stop flow of customers. Burton said she heard from many retailers that they enjoyed the night and thought it went very well.

Several of the six participating restaurants, Georgia Blue’s, Pasta Junction, Broma’s Deli, Pappa’s Pizza Pi, Bumper’s Drive In and Poppa’s Fish House, were sold out of popular items and ingredients toward the end of the evening, something Burton said “is always a good sign you had a lot of business.” Burton said she hopes next year there will be more restaurants participating as well.

The ice cream social hosted by Sen. Sally Doty was a popular spot for many shoppers as they entered to win a mani-pedi and were able to find respite from the climbing temperatures.

As anticipated, Burton said they ran out of some sizes of T-shirts during the event and reminds ticket-holders they will be contacted soon and can either have them mailed or come pick them up at the chamber.

Girl’s Night Out ticket-holders can still benefit from the goodies of the night, as well, as all merchants and restaurants offered coupon deals to be used after GNO. The $10 meal vouchers included in this year’s coupon books can be used at the six participating restaurants throughout the rest of the weekend with a few exceptions.

The assisted living center currently on deadline to be built in Brookhaven has grown from original facility estimates, based on... read more