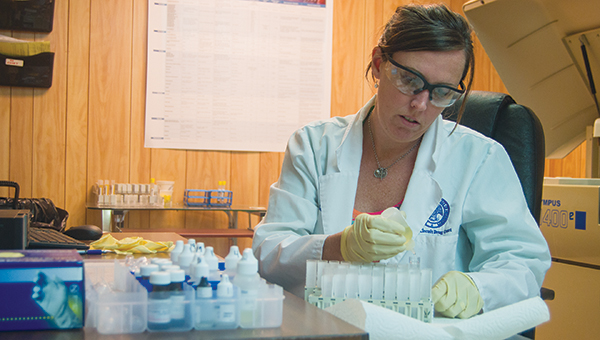 Photo by Nathaniel Weathersby
Field Officer Supervisor Pam Weber preps for drug testing by loading reagents into vials used to calibrate the urine-testing machine. Weber was assigned to the Drug Court by the Mississippi Department of Corrections.

Drug Court Coordinator John Douglas said the 14th Circuit Drug Court is a program that serves as an alternative to what he and others call a revolving door, when individuals are subject to a cycle of arrest and release because of drug addiction.

“We don’t force people to go through Drug Court. They have to want to do it,” Douglas said. He said that individuals are recommended for the Drug Court program by a number of people which could start with their arresting officer or the district attorney or others in the arresting process.

To be recommended the crime the person committed must be felonious but doesn’t necessarily have to be directly related to drug addiction. He said some non-violent crimes that were committed because of drug addiction can provide cause enough to recommend a person for drug court.

Once recommended the person goes through a screening process which assesses the state of that person’s life in relation to drugs to see if a drug addiction is indeed present.

“It’s kind of a like a personality test,” Douglas said. “There’s a scale and if a person is above a line they are considered to have a drug addiction.”

Following the screening comes presenting the Drug Court option to the individual.

“ A lot of people don’t want it. A lot are scared,” Douglas said. He described one woman who voiced what many find true: she was scared to enter the program because she was scared to quit using. “This is hard. This also takes money out of their pockets.”

Once in the Drug Court program, participants go through four phases. Phase one includes orientation and inpatient treatment recommendations. Phase two consists of continued treatment and may include Intensive Outpatient Treatment. During phase two, which can last from two to three years, all fees and restitution associated with the person’s charges must be paid in completion – contributing largely to the length of the phase.

Also during phase two participants must attend Drug Court once a week and required random drug testing twice a week.

Testing at the Drug Court facility takes place in what Douglas calls the Immuno Assay Lab. The lab consists of a large machine that can conduct urine tests for up to 60 people in an hour. The machine holds about 50 reagents – the machine tests for approximately 25 different drugs with some of them having multiple reagents – and can produce a full panel of results for one person in 15 minutes.

Douglas said the machine is self-cleaning, uses optical density to measure the amount of a drug’s presence in a sample and has a 99 percent accuracy rate. For cases that require 100 percent accuracy samples are sent off for verification.

Results from tests are automatically sent from the machine to the Drug Court case management system, an online system the program uses to keep up with participants’ records as they go through the program.

“And sanctions are immediate,” Douglas said about people who don’t fulfill their duties during the week. “They know they have to answer for it Monday.”

He said rewards in Drug Court consist of recognition from the judge amongst their peers, reduced testing, reduced court appearances and lower fees – fees can be put on the court when a participant has continued success within the program and becomes less of a burden on the program.

Douglas emphasized that treatment for drug addiction is never used as a sanction within the program.

The whole Drug Court experience can last from a three-year minimum to a five-year max.

“If you see someone struggling you want to help. They were going to jail,” Douglas said about working in the field. He said when he was a narcotics officer he remembers trying to find places for rehab for people. He said they also conducted job hunts and connected people with a learning center in Summitt that taught recovering addicts employable skills.

“As a narcotic agent we were always looking for ways to help people,” Douglas said.

“When I got here I got to see people I arrested in the program,” Perkins said. He described that as a police officer all he got to do was make the arrest.

“I like this more,” Perkins said. “I get to see them grow after the arrest, after the rock bottom.”

Perkins said that although the job is a challenge – “It drains you more mentally than physically” – he likes it. He said many times participants become overwhelmed with all the program requires of them and feel like they can’t make it.

“I try to sit down with them and try to get to why they don’t feel they can make it,” Perkins said. “I sometimes explain that the only difference between us is at some point there was a fork in the road and when I took a left, they took a right. In this program we’re not judging them.”

Bond for a Lincoln County man accused of murder was reduced from $1 million to $500,000 Monday. Fred Hill, who... read more