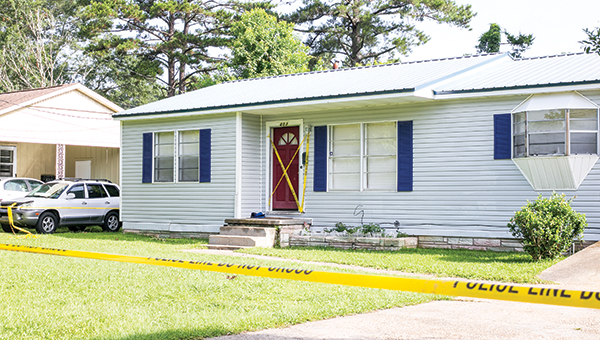 Photo by Kaitlin Mullins
Bridget Hall, 43, was shot in her home (pictured above) on Vivian Merrit Street Monday night. Her death followed the death of Kelcay Humphrey, 25, Sunday night.

The victim in Monday’s fatal shooting in Brookhaven was dating the brother of the man arrested in Sunday’s murder.

Police Chief Bobby Bell confirmed that Claudis D. Montgomery, who was arrested in Sunday’s murder, is the brother of Hall’s boyfriend, Claude Montgomery. Bell said the murders are not connected, though.

Sharon Cooke, whose sister lives across from Hall’s residence, said Hall was her best friend. Cooke said her nephew and Hall’s son were very close and would play basketball between their homes. She met Hall when they were working together at McDonald’s years back and were friends ever since.

“She was the most humble, meek person you could ever meet,” Cooke said. “She didn’t bother anybody; she was just a great person, kind and sweet-hearted, do anything for you. She was a great person — my heart is just bleeding I just can’t believe.

“I couldn’t believe it when I first learned about it at work I just kept praying ‘God don’t let it be true,’ even though I knew because everybody was saying it but I did not want it to be true,” Cooke said. “She didn’t deserve that.”

“We received a call that a person had been shot on Vivian Merritt. Upon arrival the victim was in the house,” Bell said.

He said he could not confirm how many times Hall was shot, but she was shot at close range.

He said Hall was not the only person in the house, and the department is interviewing witnesses. No arrests have been made.

A bystander on the scene Tuesday morning said the shooting happened around 11 p.m. Monday night. He said around time, he saw two men fleeing the scene headed toward North Jackson, one riding a bike and one on foot.

“We’re still working on the motive,” Bell said. “We don’t know the motive, but we have enough evidence to charge him.”

Humphrey was charged with murder in the 2008 shooting death of William Ard Jr. Ard was shot in the back at Cloverdale No. 57. Police said Ard and Humphrey had no prior relationship. Humphrey was convicted of manslaughter and sentenced to 15 years but was on earned release supervision, according to the Miss. Dept. of Corrections.

This is a developing story. It will be updated as more information is available.