Stop the violence. Enough is enough, not another one 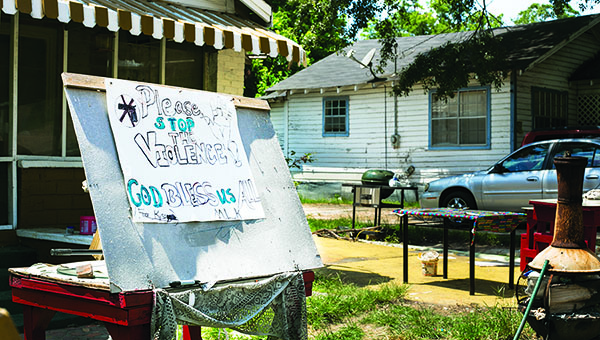 Photo by Kaitlin Mullins
A sign reading “Please stop the violence! God bless us all” could be seen on Friday after the fatal shooting of Glen Mack. Mack is the seventh murder victim this year. His death follows a grassroots effort last week to promote peace by marching through neighborhoods.

We, The Daily Leader, add our voice to the growing chorus of “Stop the violence” and “Enough is enough, not another one.”

There have been seven needless murders so far this year. The most recent killing was Thursday night. While we’ve sought to thoroughly report on the crimes and victims, we can never know the full measure of the lives lost.

The victims were mothers, daughters, sisters, sons, husbands, fathers, brothers. They were someone’s grandchild and best friend. One was only a child.

The families of the victims must now navigate life without them. Sure, the pain of their loss may one day subside, but there will always be something missing in the lives of those left behind.

Brookhaven and Lincoln County have almost doubled last year’s murder total just seven months into the year. Six of this year’s murders have occurred in the city — three of those in July alone.

Just a few days ago, marchers gathered in Brookhaven in response to the violence. They chanted “Stop the violence” and “Enough is enough, not another one.” They held signs that repeated those words.

In a cruel twist, one of the march’s organizers was gunned down in her home earlier this month.

Although our job here at the newspaper is to shine a light on the darkness around us, we want to go beyond just pointing out the problem. We want to be part of the solution.

We’re not sure how you stop the kind of violence that has infected Brookhaven, but we’re committed to helping find a solution. We invite others to commit to doing the same.

We realize it will take more than a peace march or a front page editorial in the newspaper to make a difference. Whatever it takes, we are committed to helping. We hope you are, too.