The Lincoln County Library has begun work on a new teen area after many years of planning.

Lincoln-Lawrence-Franklin Regional Library Director Henry Ledet said the library has been planning for the new teen area for about a decade, and hopes to be done by the end of summer 2016.

Ledet said the library has been putting money aside, saving donations and gifts to come up with money for the project without cutting into operating costs. Friends of the Library and groups and individuals in the community have made the initiative possible. 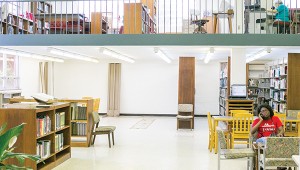 Photo by Kaitlin Mullins
The Lincoln County Library is making the first steps toward a new teen area that Regional Library Director Henry Ledet hopes to have completed by the end of summer 2016. The new area will be tailored to plugged-in teens with plenty of outlets, Wi-Fi, young adult/teen novels and more.

“It’s something we’re really excited about,” Ledet said. “We’ve been planning for 10 years I’m so pleased to actually see it happening. […] We’re trying to create a 21st-century library.”

The library will bring in new books as well as concentrate the books appealing mostly to teens and young adults in the teen area, rather than throughout the library. Ledet also said there will be a counter with stools and plenty of outlets for visitors to use laptops, tablets and smartphones.

Bea Teasley, with Reference, ILL and Genealogy Services, said the goal is to engage older children, teens and young adults in reading while providing them a safe and neat place to hang out. Teasley said she would have loved a place like that when she was that age and hopes the teen-tailored area sparks more interest.

The new teen area will be carpeted, and during this phase another area in the library, the fiction section, will have its 30-year-old carpet replaced. This will be the largest undertaking, Ledet said, as all the shelves and hundreds of books on them will have to be moved during that process. The library staff has already begun taking down shelves in the corner where the area is to be and shifting books around.

The library has about $10,000 set aside for the project, Ledet said, and he and staff will see how much they can accomplish with that budget. Ledet said the project might not move quickly, but it will surely be economically done. Within the last year or so the library worked to renovate and create the children’s area, which was ready for the summer reading program this year.

Ledet said he encourages people to come by and check on the progress of the new area as well as take advantage of the wealth of books in the library’s collection.

If we want to add hours:

Jobless rate down; number of unemployed the same

After an increase in May, Lincoln County’s unemployment rate continues to decline. June’s rate dropped to 6.5 percent, and July’s... read more