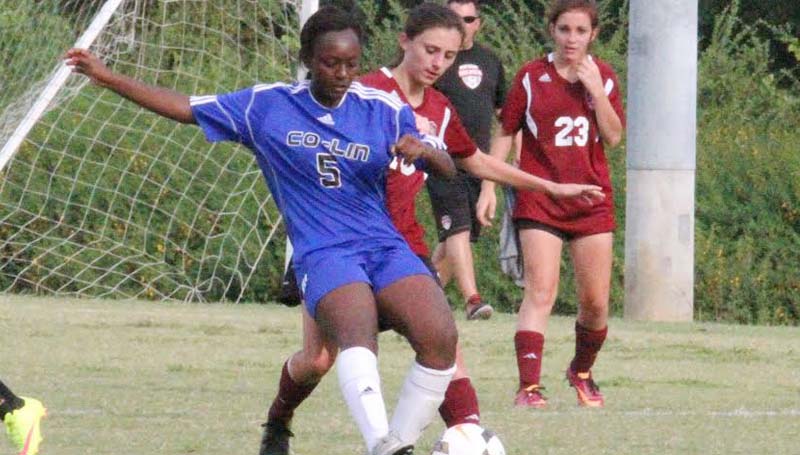 WESSON – The Copiah-Lincoln Lady Wolves soccer team finally opened MACJC play on Tuesday night by hosting the Holmes Lady Bulldogs in Wesson. The Lady Wolves had their scheduled season opener against Northwest rained out and had previously played Millsaps in a match that was considered an exhibition. The Lady Bulldogs left with a 5-1 win in a match that was much closer than the score would indicate.

The Lady Bulldogs were able to take advantage of a couple of costly Lady Wolf miscues in the first half to stake themselves a 2-0 lead at the break. The first Lady Bulldog goal was scored by the Lady Wolves, as Co-Lin allowed an on-goal early in the half to give Holmes a 1-0 advantage. With just two seconds remaining in the half, Holmes was able to score another goal when Jessie May knocked in a shot after a scrum in front of the net.

A Kylee Laird goal off a questionable penalty in the box gave Holmes a 3-0 advantage early in the second half. Laird would add another goal later as would Lori Stephenson. Competing no matter the score or the opponent has been the mantra preached by first year head coach Junior Noel and the Lady Wolves did just that throughout the second half, despite the deficit. The payoff came with three minutes left when Co-Lin forward S’Middleton made a strong run into the box and blasted home her first goal of the season.

The Lady Wolves (0-1) return to action on Friday, Sept. 3, when they open MACJC South Division play with a 2 p.m. match in Summit against the Southwest Lady Bears.

Holmes escapes with 4-2 win over Co-Lin

WESSON – Two games into the season and it would appear that this Copiah-Lincoln soccer team has some positive things... read more