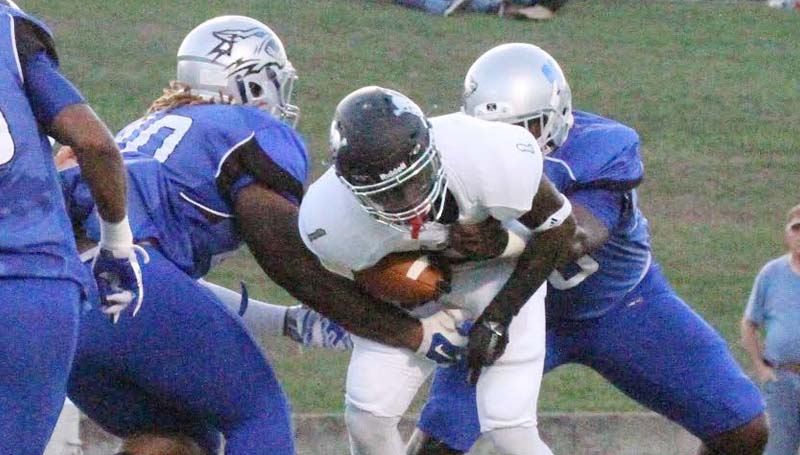 “This was a great win for our guys,” said Co-Lin coach Glen Davis. “I am extremely proud of my guys. They fought hard throughout the whole game and kept scratching to get the win.

“This game could have went either way,” said Davis. “Both teams played hard, but we were fortunate to get the win on a big interception by Jaquarius Landrews. After the game, I told the guys to enjoy this win tonight, because tomorrow we will go back to work to get ready for our next game.”

Fans and media from across Mississippi gathered at Stone Stadium to watch the much-hyped showdown.

The Lions received the opening kickoff, but fumbled the ball on the their first possession, with Co-Lin’s defense recovering.

Co-Lin’s offense took over and marched down the field, but the Wolves settled for a Greg Nickels 20-yard field goal to give Co-Lin an early 3-0 lead. 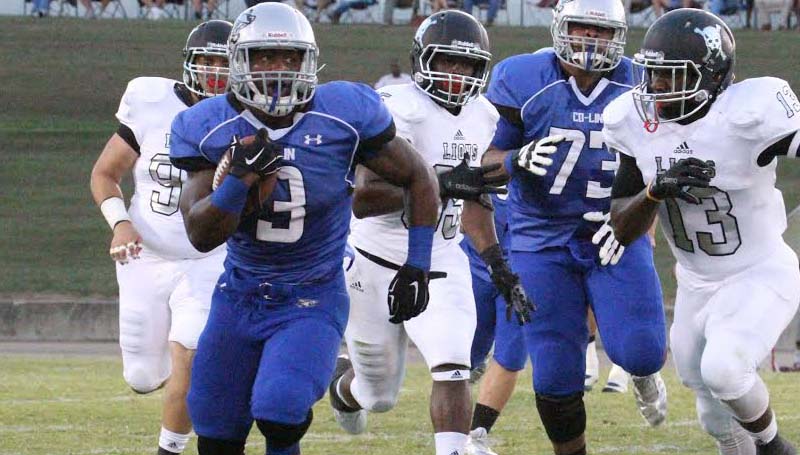 After a series of defensive battles, the Lions managed to get on the scoreboard late in the first quarter when sophomore quarterback Wyatt Roberts connected with Isaiah Wright on a 65-yard pass play to take over the lead at 7-3 after Grayson Pontius hit the extra point. Pontius finished 3-of-3 on the night in extra point kicks.

In the second quarter, Co-Lin dominated as it controlled the line of scrimmage against East Mississippi.

The Wolves took control of the half with 10:12 left when freshman quarterback Garrett Kruzcek hooked up with DeAndre Barnes for a 22-yard passing touchdown to give Co-Lin a 10-7 lead. Nickels kicked the extra point and finished the night 4-of-4 kicking PATs.

Co-Lin’s offense returned to the field, after the Wolves’ defense shut down the Lions to force another punt, to continue their rhythm, to score another touchdown to increase their lead to 17-7. Kruzcek connected with Alexander Hollins on a 40-yard touchdown strike with 7:05 remaining.

The Wolves went into halftime leading 17-7.

East Mississippi wasted no time knocking the Wolves back on their heels in the third when Roberts threw a 12-yard pass to D.J. Law with 14:35 remaining to cut into Co-Lin’s lead at 17-14.

The Lions managed to tie the game at 17 late in the third quarter on a 26-yard field goal by Pontius.

The contest remained tied until the 2:42 mark in the fourth when the Lions captured the lead on a 56-yard touchdown pass from Roberts to Dario Robinson.

Co-Lin took over on the next possession with their backs against the wall. But the Wolves quickly marched down the field and managed to punch in a late touchdown with 23 seconds left as sophomore running back Lakedric Lee plowed five yards to tie the game at 24-24 as regulation ended.

In overtime, the Wolves received the ball first and continued their hot offensive rhythm as they scored first on Lakedric Lee’s three-yard rushing touchdown to give the Wolves a 31-24 lead.

The Lions took over with high hopes of answering the Wolves’ challenge. On third down, Roberts threw a pass looking to get a first down, but instead was intercepted by Landrews to end the game.

Offensively, Kruzcek completed 32-of-48 passes for 448 yards and three touchdowns to lead the Wolves.

Lakedric Lee was the leader in rushing with 28 carries for 124 yards. He was also the top receiver with 12 catches for 104 yards.

Roberts directed the Lions by completing 15-of-34 passes for 392 yards and two touchdowns.

The Wolves (2-0) will be on the road next week as they travel to Mississippi Delta. Kickoff is at 7 p.m.