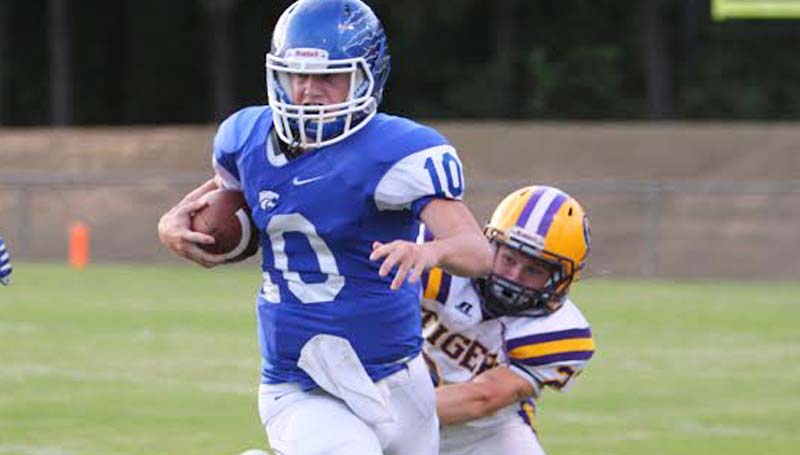 DAILY LEADER / SHERYLYN EVANS / Brookhaven Academy’s Madison Smith (10) escapes from a tackle as Centreville Scout Chandler (23) tries to bring him down from behind Friday night.

Centreville Academy (1-2) capitalized on two Brookhaven Academy (0-3) fumbles and an interception and gashed the Cougars defense for 388 total yards in a 48-7 win Friday night at R.M. “Red” Stuard Field.

Junior quarterback Madison Smith made some athletic plays, but drives were difficult to sustain against the reigning district champs.

Smith led the offense to 162 total yards hooking up with senior receivers Ross Felder and William King and sophomore Price King. The Cougars tried to establish a running game early with designed runs for Smith and William King, who had the only Cougars score on a 30-yard sprint in the third quarter. Senior Carter Culbertson picked up 31 yards on six carries.

Centreville amassed 209 yards on the ground on 33 carries averaging over six yards per rush. Senior Roger Rushing led the Cougars with nine tackles and junior Connor Griffin had 7.5 tackles and had a long interception return where he broke several tackles.

Madison Smith had three sacks on defense and junior Fisher Warren had five tackles and broke up two passes. William King also had an interception. Sophomore Grant James had four tackles including one for loss.

The Cougars will be on the road Friday as they visit Natchez to play to the Natchez Cathedral Green Wave. Kick off is at 7 p.m.

PRICEDALE – North Pike’s Trent Coleman nailed a 27-yard field goal in double overtime to give the Jaguars a 38-35... read more