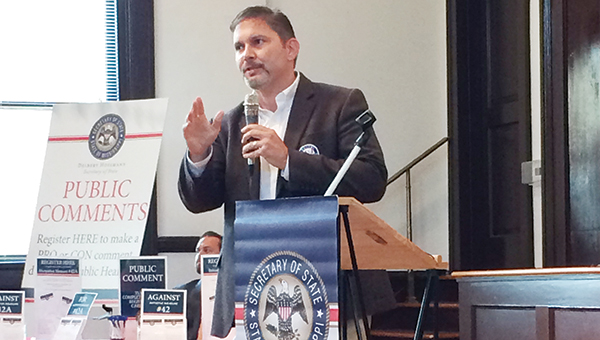 Mississippi’s eighth public hearing on Initiative 42 took place on the MS School of the Arts campus Tuesday before a crowd of area residents who demonstrated overwhelming support for the initiative.

Secretary of State Delbert Hosemann hosted the 5:30 p.m. hearing at Lampton Auditorium, mentioning the history of ballot initiatives put forth by the people and the importance of the public hearing.

Initiative 42 “would protect each child’s fundamental right to educational opportunity through the 12th grade by amending Section 201 of the Mississippi Constitution to require that the State must provide and the legislature must fund an adequate and efficient system of free public schools. This initiative would also authorize the chancery courts of this State to enforce this section with appropriate injunctive relief.”

Initiative 42-A, an alternative put on the ballot by the Legislature, “is proposed as a legislative alternative measure to Initiative Measure No. 42 and would require the Legislature to provide, by general law, for the establishment, maintenance and support of an effective system of free public schools.”

Initiative 42 got on the ballot through citizens’ petitions. Supporters say it’s intended to force lawmakers to fully fund an education budget formula that has been ignored most years since it was put into law in 1997. The initiative says people could sue the state if school funding falls short.

The Republican-controlled Legislature’s Initiative 42-A would not allow lawsuits.

Rana Mitchell spoke in favor of Initiative 42 and against 42-A. Mitchell said she is no lawyer or politician but a parent with involvement in the Carroll County School District’s Board as assistant superintendent.

Frank Corder spoke in opposition of Initiative 42 and in favor of 42-A. Corder is a Pascagoula school councilman, small business owner and a political writer and analyst. Both speakers have children currently enrolled in Mississippi Public Schools.

Corder talked about the problems with the initiative being in the details. He said it would take the Legislature out of the process, taking away citizens’ votes, and it is essentially taxation without representation.

Corder talked about the support for 42-A including business and industry leaders, a host of lawmakers in Jackson, the Medical Association and went on to speak about who is behind Initiative 42. The latter half of Corder’s appeal was centered around political parties, speaking about how a now powerless Democratic population in Mississippi is using the initiative to gain power, mentioning the group in Washington, D.C. that has contributed to funding 42 efforts.

“I can tell you who’s behind Initiative 42 — 200,000 Mississippians who signed those petitions,” Mitchell said, rousing a thundering applause throughout the auditorium. “Every single time he mentions a judge, every single time, he’s presupposing that the Legislature will not follow their law again. It never has to go to court, it never has to go before a judge if they will simply follow their own 1997 law.”

“Right here in Brookhaven and Lincoln County, your schools have been shortchanged $21 million since 2008. That’s enough for 60 new teachers for 10 years,” Mitchell said. “Just let that sink in.”

After the support and opposition presentations the floor was opened to those who signed up to speak — a majority spoke in favor of Initiative 42. One person, Johnny Franklin, spoke in opposition while nine people spoke in favor including Rep. Bobby Moak, Enterprise Attendance Center Principal Shannon Eubanks, school board attorney Jim Keith, a representative from the League of Women Voters, Julie Winckler of the Parent’s Campaign and other educators and participants in public education.

“What can I do with a quarter million dollars?” Eubanks asked, referencing what funds his school missed out on last year. “I could take care of my facilities. I could hire more teachers. I could offer art — something we don’t have. I might could even start a band. There’s a lot that we can do but what were doing is squeezing and folks there’s nowhere else for me to cut, nowhere else for Lincoln County schools to cut.”

The Parent’s Campaign’s Winckler touched on a subject many seemed to find very telling.

“I learned ‘Oh, there’s a law on the books that tells us exactly what we should be funding our schools’ and we don’t fund it,” Winckler said. “I went to meet with my senator and I told him this is my big issue, are we gonna get that right this year and he said ‘I don’t think there’s the political will.’ That is the problem.”

Photos by Kaitlin Mullins and Julia V. PendleyRescue crews cheer as the boy is pulled from the hole Monday evening.... read more