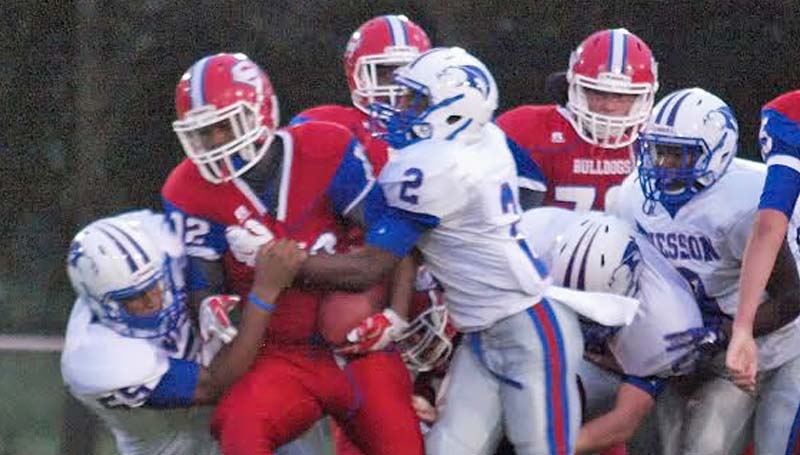 SEMINARY – The Wesson Cobras relinquished a small halftime lead, giving up three touchdowns in the second half in a 30-12 loss to the Seminary Bulldogs Friday night.

“Our guys gave a great effort. We did not do a very good job of blocking our opponent tonight,” said Wesson coach Ronald Greer. “We will have to improve in that area to be successful on the offensive side of the ball. Defensively, we are improving but we must continue to get better each week. Our kicking game is really hurting us right now. From bad snaps to poor kicks, we need to improve in our kicking game.”

Seminary put the first points on the scoreboard with a field goal after making it into the Cobras’ red zone.

Through the remainder of the first quarter, it was a defensive battle between the two teams as the Bulldogs led 3-0.

The Cobras came out strong in the second quarter as Cornelius Barlow scored a touchdown to give Wesson a 6-3 lead.

The Bulldogs’ offense took over and worked the ball down the field only to fumble it away as Cobras’ Jeremiah Stapleton recovered the ball.

Quarterback Peyton Burns completed a pass to Cornelius Barlow who ran it to the end zone for his second touchdown of the night to give Wesson a 12-3 advantage.

Seminary answered by moving the ball down the field quickly as the Bulldogs’ Javaris Crosby scored the first touchdown of the night for Seminary. Brazos Webb kicked the extra point bringing the score to 12-10 at the half.

After halftime, Seminary scored on a 49-yard rushing touchdown by Felix McCullum. The Bulldogs’ defense clobbered the Cobras’ offense with several sacks as Wesson struggled to advance the ball. The third quarter ended with Bulldogs leading 16-12.

The Cobras could not gain any yards with their rushing attack and when they attempted a pass they were picked off twice by Seminary’s Stanley Reese and Calvin Boyland.

Cornelius Barlow was the top receiver with seven catches for 87 yards and two touchdowns.

Defensively, Cornelius Barlow and Tre Glasper powered Wesson with eight tackles each. Jeremiah Stapleton and Jamarcus Patterson had seven tackles each and Stapleton had a fumble recovery.

The Wesson Cobras (2-2) will host the Raymond Rangers Friday night in Wesson at 7 for homecoming.