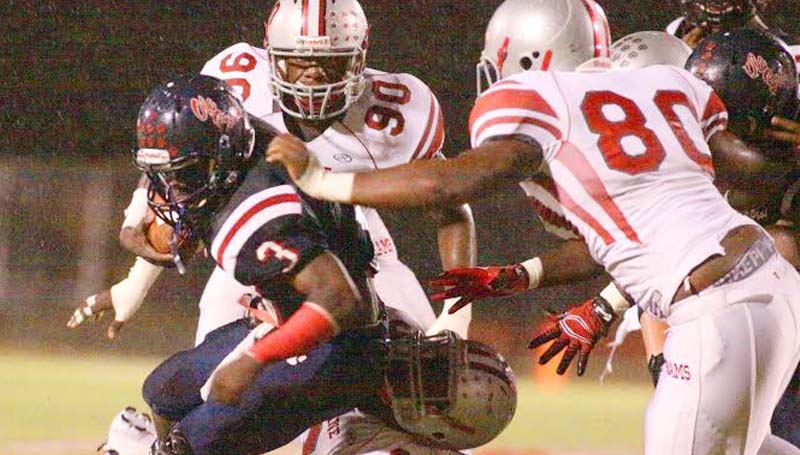 Despite the inclement weather that delayed the kickoff of this Region 3-5A contest by 10 minutes, the Brookhaven Panthers managed to fight the elements and hold off a second half surge by the Provine Rams. After the final horn sounded, Ole Brook had realized their first victory of the season with a 21-14 homecoming win at King Field.

Brookhaven (1-6, 1-2) and Provine (4-4, 1-2) continue in Region 3-5A play Friday night. The Panthers will travel to Laurel, while the Rams return home to Hughes Field for the first time in three weeks to host the Wayne County War Eagles. Kickoff for both games is at 7 p.m.

It would be a game of two halves, as each team was trying to assert themselves. Along with the wet conditions, turnovers would plague both teams.

After a scoreless opening frame, Ole Brook took advantage of the first turnover by the Rams at the 9:20 mark of the second period as Panther defensive back Dedric Smith picked up a DeAngelo Shelton fumble and returned it 42 yards for the first score of the game. Tyler Mixon nailed the first of three successful PAT kicks and the Panthers held a 7-0 lead. 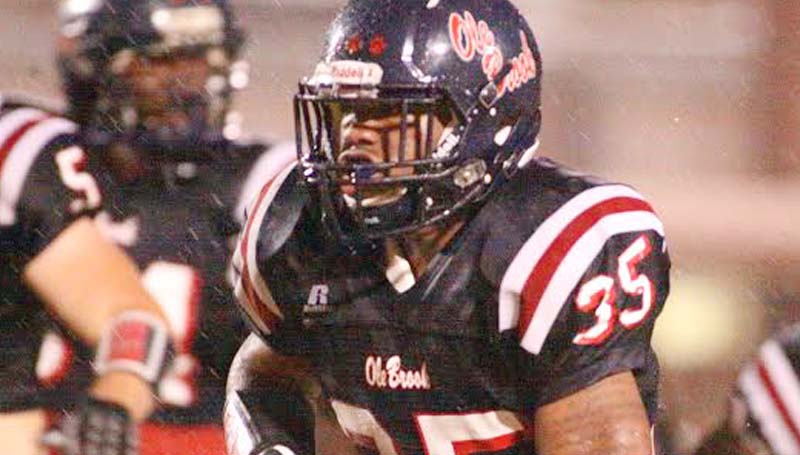 Brookhaven head coach Tommy Clopton saw his defensive unit shut down the Rams’ ensuing drive in six plays. Following a Provine punt to the Brookhaven 19, it took only a one-play, 81-yard scoring jaunt by senior running back Thomas Poole to put Clopton’s crew up 14-0.

Poole also provided a 77-yard kickoff return for a score to start the second. He finished the game with 265 yards of total offense, including a 29-carry, 179-yard, two-touchdown worksheet. Poole was the second leading rusher in Region 3-5A coming into this game.

Rams head coach Otis Riddley saw his offensive unit come to life on the ensuing kickoff. A nine-play, 67-yard drive culminated in DeAngelo Shelton scoring the first-of-two touchdowns in a six-minute span. His eight-yard run at the 8:49 mark and a three-yard scoring strike with 2:23 left in the third brought the Rams within seven, 21-14.

Late in the fourth, the Rams scored on a Shelton-to-Daniel Wilson pass that would have tied the game. But a phantom illegal procedure flag thrown well after the TD would wipe the score off the board. Two plays later, a Wesley Calcote interception would seal the Panthers’ first win of the year.

“Brookhaven won the turnover battle and made big plays when they needed to,” said a somber Riddley following the game. “We did not play very well, but we played better in the second half.”

Shelton paced the Ram attack with 93 yards on 24 rushes, and was 5-of-17 passing with one interception. Brown had one catch for 38 yards. Linebacker Craig Harper and defensive tackle Clarence Thomas led the Ram City defense with 5.5 tackles each.

For the Panthers, Sevonte Quinn was 5-of-7 for 12 yards and had nine yards rushing on 10 carries. Darrian Wilson led the receiving corp with two catches for 20 yards. Defensively, Wesley Calcote led the Panthers with 10 tackles, an interception and a sack. Stephen Springfield contributed five tackles, had a forced fumble, a tackle for a loss, and a sack. Dedric Smith provided five tackles, had a fumble recovery and a tackle for a loss. Willie Bates finished with six tackles and had a forced fumble.

“We are glad to get that first win of the year,” Clopton said as he was being swarmed with congratulatory greetings. “We were able to take advantage of their turnovers and overcome some mistakes of our own.”

“Hats off to Provine and Coach Riddley for they were down 21-0 before they mounted a furious comeback,” said Clopton. “We were able to run the ball effectively. Proud of our team and their efforts. Overall, I couldn’t be more proud of our guys finding a way to finish the game. We had it in control and let it slip away, but we found a way to hold on in the end. Getting the first region win was big for us. We have to continue to work on getting better every day.”