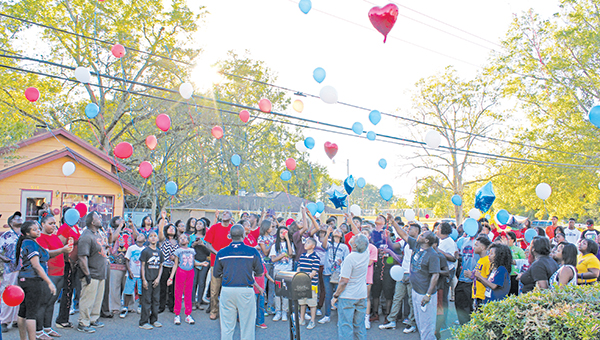 Photos by Xavier Wilcher
Friends, family and loved ones of the late Jevonta Dickey and Shaquan Richardson gathered to release balloons in their memory Wednesday.

It has been a year since Brookhaven students Jevonta L. Dickey and Shaquan Richardson were killed in a car accident.

Richardson’s mother Shirley Porter and Dickey’s mother Virginia Harris organized a memorial to honor their sons. Family and friends gathered Wednesday on Union Street where the accident occurred to remember Dickey and Richardson.

“Shirley came up with it, but we both just took over,” Harris said. “It was so beautiful. Everybody there was wonderful, and we thank Coach Wilson for doing our memorial service prayer, and a little talk. We thank everybody that was there. It was a wonderful turnout.”

Dickey and Richardson died Oct. 14, 2014, after their vehicle was struck by Charles Acy’s Hummer. Acy is alleged to have been speeding while under the influence of drugs. His trial is scheduled for December. The 18-year-old has pleaded not guilty to two charges of DUI homicide.

Porter said her son was very energetic. He loved sports, especially basketball, and Porter said she enjoyed watching his games.

Richardson’s young niece lays a hand on their memorial marker where the fatal wreck occurred at 914 Union St.

“The only part about the football, I was scared of him getting hurt, but he was tough,” Porter said.

“He just loved people. He was a people person,” Harris said.

Dickey and Richardson both left behind brothers and sisters. Porter said it’s been hardest on his sister.

“My daughter and him were close. They were best friends,” Porter said. “They were always together. He would call her before he would call me, because they were that close.”

Harris said her son’s death has been hard on her every day. Porter said it’s not something they’ve been able to move on from.

“I don’t think you could ever get over it,” Porter said. “You’ve just got to trust God and believe that God has a plan, and in time it will be revealed to you. It’s painful. Not a day goes by you don’t think about it. You’ve got to have family and friends that support you. The community and the churches and school districts, they have really been wonderful.”

“The turnout was tremendous,” Porter said about the memorial. “There were so many people. The street was filled, and yards. From the school district, the kids and the teachers. We just said a little prayer. Then we released the balloons all at one time. Those boys must have had a very big impact on the community, because people were just everywhere.”

Porter said the Brookhaven Technical Center made a cross for the boys, and they also lit candles.

“It was a sad and wonderful moment,” Harris said.

More than 100 entries were submitted and judged for the seventh annual art competition put on by the Brookhaven Regional... read more