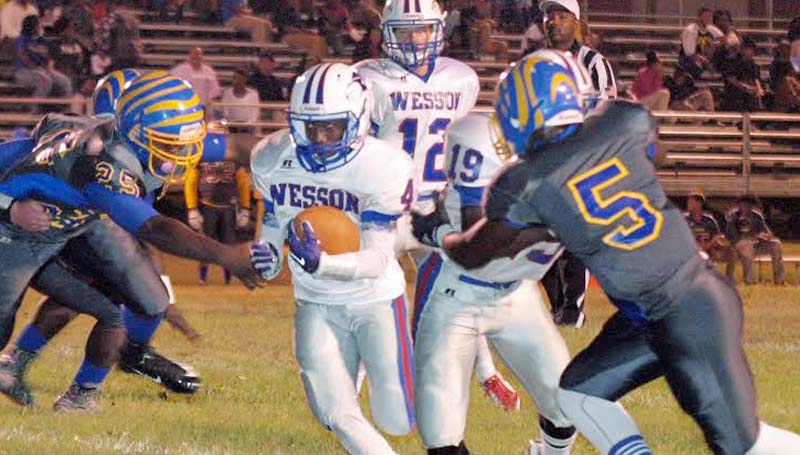 “We just did not make enough plays to win the game,” said Wesson coach Ronald Greer. “Now, we must regroup and start preparing for Franklin County next week.”

After a scoreless first quarter, Wesson’s offense got more aggressive – Tre Glasper and Jamarcus Patterson made some good plays to keep a second-quarter drive alive. But Wesson would fumble the ball on Jefferson County’s seven-yard line, spoiling the scoring threat.

Peyton Burns and Patterson were able to help Wesson collect two first downs, only to have the drive stop with another fumble on the 50-yard line as the first half ended scoreless.

In the third period, Tiger quarterback Rah’Kendrick Reynolds connected with Jaqurious Blake for a 35-yard touchdown pass. James Claiborne Jr. punched in the two-point conversion to give Jefferson County an 8-0 lead.

Wesson threatened to answer as it quickly marched down the field collecting six first downs, only to fumble the ball away for the third time of the night.

In the final quarter, Wesson’s Glasper intercepted a pass to stop the Tigers’ scoring threat, but Jefferson County’s defense would grab an interception of its own and return it for a touchdown to give the Tigers a 14-0 lead.

With 18 seconds left in the contest, Wesson managed to break up the Tigers’ bid for a shut out when Cornelius Barlow scored a rushing touchdown.

Wesson went for the onside kick and recovered it. With momentum favoring the Cobras, Peyton Burns went to work using his arm to move the ball down the field for another scoring opportunity. But the Tigers’ defense held strong as they came up with an interception to end the game at 14-6.

Offensively, Wesson finished the game with 278 yards of total offense. The Cobras rushed for 261 yards on 40 carries, and were 4-of-16 passing for 108 yards. Cornelius Barlow was the offensive leader with three catches for 115 yards and a touchdown.

Defensively, Bobby Pritchard and Jamarcus Smith powered the Cobras with five tackles each.

Wesson (3-6, 0-3) will be in action Friday as it returns home to host the Franklin County Bulldogs. Game time is 7 p.m. at Stone Stadium.