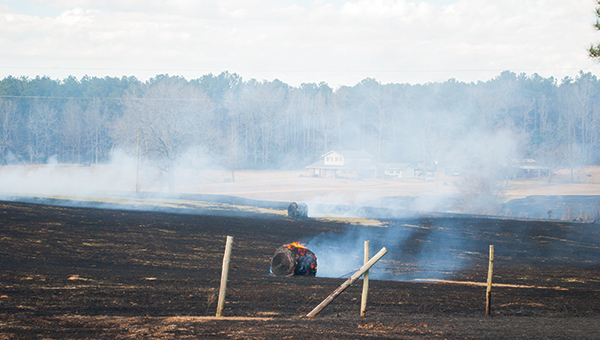 File photo
Recent drought conditions, strong winds and low humidity have meant disaster for those who disregard the burn ban. Surrounding counties have lost hundreds of acres over the past several days when fires could not be controlled.

As most of southern Mississippi remains in the “very high” Observed Fire Danger Class and fires claim hundreds of acres nearby, authorities urge citizens to obey the county’s strict burn ban.

Civil Defense Director Clifford Galey addressed the Lincoln County Board of Supervisors in its regular meeting Monday morning. Galey said the burn ban that was enacted back on Sept. 8 is still in effect until Nov. 2 in Lincoln County with no exemptions including contractors. Brookhaven and Lincoln County continue to be areas of severe and extreme drought.

“We’ve been very lucky since Friday we’ve probably lost 75-100 acres. Our surrounding counties have lost well over 1,000 acres, and it seems that people still don’t quite understand that they can’t burn the leaves in their yard,” he said.

Any person who knowingly and willfully violates a burning ban is guilty of a misdemeanor and may be fined not less than $100 and no more than $500. For any questions about burn bans check www.mfc.ms.gov/burn-bans.php.

Lu Becker addressed the board Monday about the county joining the city in its efforts to rehab and support the place that is required to take in all stray, wild or dangerous dogs — city and county-wide. In taking over what was the city pound, representatives from the Brookhaven Animal Rescue League created a new group to rehab and oversee what will now be referred to as a shelter. Whether the group will be called Friends of the Brookhaven City Shelter or Friends of the Lincoln Animal Shelter is not decided yet, as the group holds out hope that the county might get on board.

Becker, an advisor to the board over the renamed facility, asked the county about a building it owns that has been more or less neglected and abandoned. Inside the building there are some broken or defective fans and heating units, as well as some other old materials that could possibly be used to make new pens. Becker said the group could really use the items, as only three of the 16 kennels are functional, winter is coming and there is no place to keep vicious dogs.

Currently, the facility is open to the elements. The group plans on putting up a wall to shelter the animals from winter winds, planting trees for shade and replacing all of the kennels. Becker also plans to address the fact there is no office for the facility and no procedure for adopting abandoned animals.

Becker talked about potential grants and the hope of modeling the facility after the system in Rankin County and Brandon. For the first time, the extreme overpopulation has left BARL in the red and in need of help taking on this new undertaking. The board said the supervisors would have until next meeting to look at the equipment in the building to see if they want it before possibly releasing it to the shelter.

Co-Lin Program Coordinator Kenny Goza invited the board to learn more about its workforce program. The Workforce Education Center has many opportunities for employers through training programs that are designed to enhance an employee’s performance and achieve organizational objectives.

There are safety programs and training which can be attractive to larger industries or businesses, which require or benefit from certain training. Other training includes computer and computer program skills; health training such as CPR and other certifications; management and team building skills; and other specific skill training in welding, construction, industrial environments and more.

The board of supervisors made plans to visit Co-Lin after one of its future meetings.

Monday’s meeting came to a quirky end with the board and guests singing “Happy Birthday” to Chancery Clerk Tillmon Bishop and District 2 Supervisor Jimmy Diamond, who share a birthday, Oct. 19.

A Brookhaven man was arrested Saturday for probation violation and touching a child for lustful purposes after the man was... read more