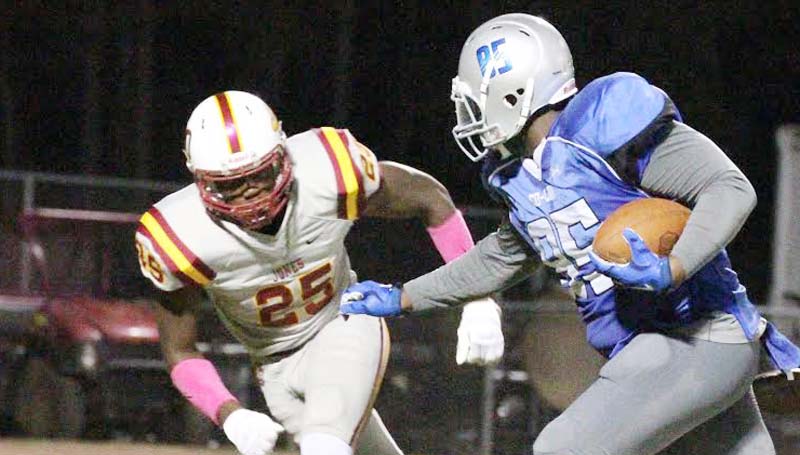 ELLISVILLE – Sophomore Joseph Este intercepted a pass in the end zone with 15.4 seconds left in the game to give the No. 10 ranked Co-Lin Wolfpack a 17-14 win over the Jones County Junior College Bobcats Thursday in the regular season finale for both teams.

Co-Lin finishes the regular season 7-2 (NJCAA), 5-4 (MACJC) overall, and 4-2 in the South Division. The Wolfpack tied East Central and Hinds for second place in the division, but East Central won the tiebreaker and will advance to the playoffs on Oct. 31.

“It wasn’t a pretty game offensively or defensively, but I was proud of the way our kids kept battling,” said Co-Lin head coach Glenn Davis. “Offensively, we didn’t make first downs at the end to put the game away. Defensively, we found a way to win it at the end with an interception. We gave the game ball to Joseph Este for making the play of the game.” 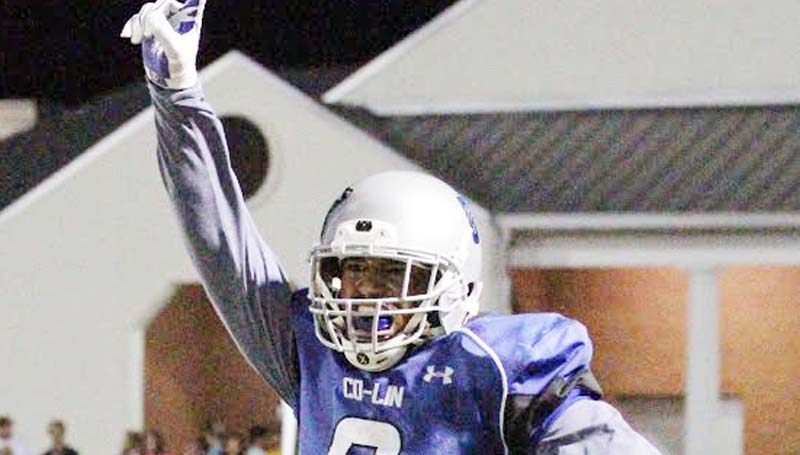 Este, who missed four games in the middle of the season with a broken collarbone, was playing with a heavy heart after attending his grandmother’s funeral in Louisiana earlier in the day.

“This game meant everything to me,” said Este. “I had some adversity today, but I knew my teammates were depending on me. I took it to heart tonight,” said Este.

The Wolfpack held a 17-7 early in the fourth quarter when Jones County’s Al’Dreecous Wilson intercepted a Garrett Kruzcek pass to give the Bobcats the ball at the Co-Lin with 11:34 remaining. Jones drove the ball down the field and score on a 5-yard run by running back Stephen Cowan with 6:52 left in the game. Michael Godley’s PAT with cut the Co-Lin lead to 17-14.

The JCJC defense would hold and on the first play of their next possession Tevin Moore run 40-yards down the sideline to give the Bobcats a first down at the Co-Lin 12-yard line. But the Wolfpack defense stiffen and would back the Bobcats up to the 24-yard line. JCJC’s place kicker Godley’s 41-yard tying field goal attempt would go wide left and the Wolfpack would hold onto a 3-point lead with 3:34 remaining.

The Bobcats would hold the Wolfpack on three downs. Co-Lin punter Greg Nickles, the NJCAA’s Special Teams Player of the Week, would boom a 45-yard punt and JCJC would took over at their 21-yard line with 2:17 remaining.

The Bobcats would mount a final drive and had a first from the Co-Lin 16 with 50 seconds left. Wolfpack defensive end Paul James would sack quarterback Kelvin Bourrage for an 8-yard loss. Co-Lin would be called for pass interference on the next play, giving the Bobcats a first down at the Wolfpack 15 with 25 seconds to play.

After in incomplete pass, Este would intercept Bourrage’s pass in the end zone with 15.4 seconds left to preserve the Wolfpack win. It was Este’s second interception of the game.

Co-Lin took a 7-0 into halftime. Kruzcek found tight end Matias Robinson on a 32-yard touchdown strike. Greg Nickles kicked the extra point and the Wolfpack led 7-0 with 6:04 left in the first quarter.

With 10:21 left in the third quarter, Bourrage would get the Bobcats on the scoreboard dumping a short screen pass to Moore who raced 68 yards for a touchdown. Godley’s extra point tied the game at 7-7.

JCJC was called for unsportsmanlike conduct after the touchdown and was penalized on the ensuing kickoff. Co-Lin’s John Ferguson would return the kick to the 50-yard line.

Five plays later, Kruzcek would score from 18-yards for his first rushing touchdown of the season. Nickles kicked the extra point and Co-Lin led 14-7 with 8:14 remaining in the third quarter.

The Wolfpack would mount a drive down to JCJC’s 7-yard line. But the drive stalled and, Nickles would hit a 24-yard field goal with 1:37 left in the third quarter, extending the Co-Lin lead to 17-7. That field goal would prove to be the difference in the game.

Kruzcek was 22-of-38 for 215 yards, one touchdown and three interceptions. Robinson had three catches for 85 yards and a touchdown. Ole Miss transfer Dayall Harris had seven receptions for 68 yards. On the ground, Galloway would rush 18 times for 72 yards and Catchings had 9 carries for 70 yards.

Daily Leader / photo submitted / In Thursday’s senior at the Brookhaven Country Club, the team of (from left) Jerry... read more