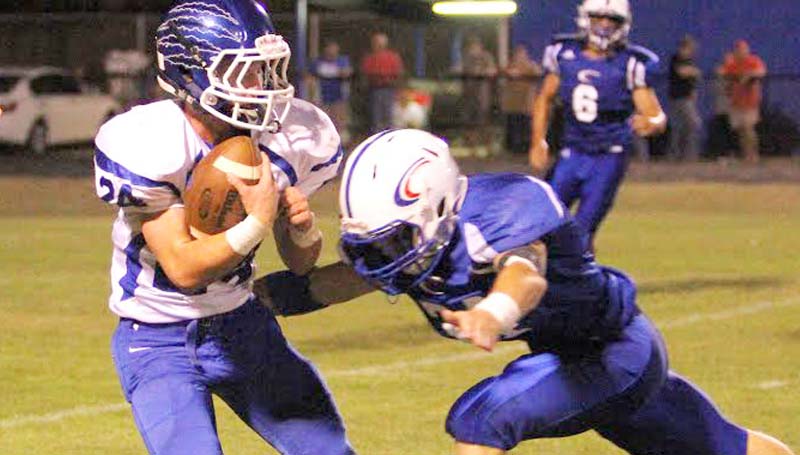 GALLMAN – The Copiah Academy Colonels marched past the Brookhaven Academy Cougars in a 43-7 victory Friday night in MAIS action.

The Colonels, under the direction of coach Paul Anderson, came out on fire and dominated the first half as they hammered the Cougars with a 43-point outburst.

Quarterback Dalton Hayes provided the offensive spark to ignite the explosion with a 35-yard passing touchdown to McQuell Powell. Jonathan Martinez finished the night a perfect 5-of-5 on the extra-point kicks.

In the second period, the Colonels scored the final touchdown of the game when Causey punched in a four-yard rushing touchdown with 1:09 left.

In the second half, the clock continued to run as Copiah Academy commanded a 43-0 lead until the fourth quarter.

Brookhaven Academy managed to break up Copiah’s bid for a shutout with 7:45 remaining when junior quarterback Madison Smith hooked up with sophomore receiver Price King for a 52-yard touchdown pass. Nic Cizner was successful on the extra point attempt.

Madison Smith was the leader for BA as he completed 10-of-29 passes for 85 yards, one touchdown and one interception.

The Cougars, coached by Blake Purvis, finished their season winless with a 0-10 record. The Colonels (7-3, 2-2) will be in action Friday as they travel to Hattiesburg to take on the Presbyterian Christian Bobcats. Kickoff is at 7 p.m.

PASCAGOULA – Class 1A top-ranked Resurrection threw its fourth consecutive shutout as the Eagles celebrated homecoming with a 55-0 win... read more