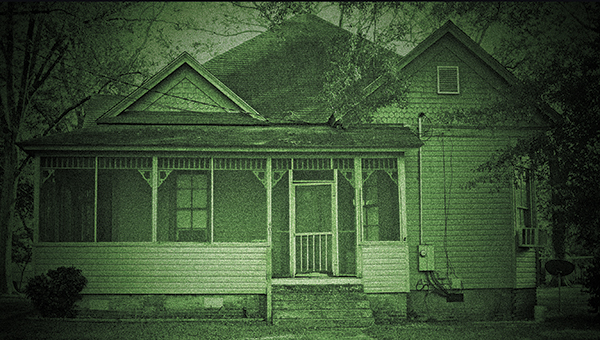 Photo illustration by Kaitlin Mullins / The Williams’s house at 401 West Congress St. has had its fair share of spooky happenings, from the odd to the just plain unexplainable.

To kick off the scary season, The Daily Leader decided to track down a few spooky stories. Below is the second in our “haunted” series.

At the Williams home, it isn’t unusual for unannounced, uninvited visitors to make themselves known in the middle of the night. There’s just one thing: they aren’t living people.

The Williamses, Judy and Bill, did not know the house they found, loved and decided to move into at 401 West Congress was haunted until a series of events unfolded that made them believers. Judy Williams shared her and her family’s experiences starting from when they moved in in 2005.

Judy said she was sitting in the dining room while her husband was gone and her kids were at school when she felt something touched her on her back.

“I didn’t think much about it, but it kind of gave me a creepy feeling,” she said.

She was in the kitchen, reaching up into a cabinet searching for a knife when she found a pair of kitchen shears she had been missing. Judy said as soon as she said to herself “Oh there are my kitchen shears,” something grabbed her shorts.

“Something grabbed my shorts and pulled me all the way back — almost knocked me down,” Judy said. “I whirled around and thought it was my husband, but nobody was in there. That was a trip right there.”

Judy said from the dining room she can often hear glasses clinking and drinks being poured, only to find no one there. This, she said, happens all the time. But once in the dining room she heard something really heavy drop in the kitchen. Of course, no one was there, but nothing was misplaced either. She said the sound was very loud and sounded like a big crash.

Then it gets weird

Bill Williams’ middle son Ryne was talking to a friend in Illinois on the phone. Ryne didn’t believe in any of the weird stuff happening, nor did he see anything but was talking to the girl about the creepy house. The friend informed Ryne, Judy said, that she was psychic, and proceeded to tell him that a young girl burned to death in a fire in the house and that her body is supposed to be buried in the backyard.

Six months to a year later… it gets weirder

Judy nor Bill thought much of their son’s friend’s claim, until a crazy coincidence happened that kind of stunned the family.

“We had pizza delivered and the guy that delivered the pizza, his uncle had lived here before,” Judy said. “The guy said he used to come up here and visit his uncle all the time and he said his uncle told him that this house was haunted. That he could hear children laughing and running up and down the hall, in the rooms giggling and playing. He said his uncle told him that somebody told him there was a little girl buried out in the backyard. How would the girl on the phone in Illinois that my stepson talked to know about that?”

Judy was watching TV in her room one night, she said, when she heard what sounded like kids jumping on the bunkbeds in her sons’ room. Calling out for her son Cole, he replied from the dining room that he was drawing. Judy said she heard the bed creaking and the jumping and rattling sounds once more before she said “You kids stop jumping on that bed in there,” and the noise stopped.

“The experience that I had was viewing a shadow figure of a somewhat pudgy 5’ 5” woman walk from our kitchen through the dining room and then turn to the left towards the hall/bedroom,” Bill said. “At the time this happened I was loading my work truck around 2 a.m. and had made a few steps up to our side entrance door, when I saw this shadow person. I immediately went inside to see if Judy or one of the kids had gone to the kitchen and were going back to bed. Of course, they were all sound asleep. Next I checked all of the rooms to see if someone might have sneaked inside the house while I was gathering my suitcase and other things for my trip. Quite confused, I found no one but family members inside the house before leaving.”

“He turned the house upside down looking for someone,” Judy said. “He went and turned every light on in the house, and he looked in every closet and looked under every bed. Looked in every nook everywhere. He didn’t believe ‘til he saw that but now he does. He said he never would’ve believed it.”

“I was laying on my side of the bed, I was awake,” Judy said. “And something said ‘I bet you hear me now.’ Bill didn’t hear it. It was so close to my head. I thought my son Cole was up. I had to sit a minute then go and make sure — they weren’t up.”

“Most happenings happen on Sunday morning between 4:30 and 7 in the morning,” Judy said. “My husband and I were laying in bed one morning; all of a sudden on my side my bedside table you could hear the drawer handle shaking. I said ‘You hear that Bill’ and he said ‘Aw thats a rat’ dismissively and I said ‘We don’t have rats in here.’ He said ‘You’re imagining it,’ and then he said ‘I hear it, but I just don’t know what it is,’ and it stopped on my side and then started on his.”

A paranormal team called “Spirit Seekers,” affiliated with the Mississippi Paranormal Society in Vicksburg, visited the home for their first residential investigation.

“They came in with the EMF detector, and they got a lot of high readings,” she said. “They caught voices, it’s called an Echovox, and we talked to our ghosts. They talked back. You’ve got Ellen the little girl. She’s 7 years old, she died in a fire in 1942. She said all that.”

Judy said at one point, her husband Bill asked the ghosts if they liked the family that was in the home now and the voices said yes.

About two weeks ago

“It was kinda chilly and Rob (son) had to get up and go to work and I was thinking, you know as a mom you think ‘Do I need to get up and light the heater, or do this or that’ and I was pondering that in my mind — I wasn’t speaking out loud. Bill was asleep and all of a sudden a whisper real loud said ‘You’re right!’ right over me. This voice whispered it but loudly.”

These aren’t the only examples of activity in the house, and weird things happen all the time she said. Judy said though she doesn’t feel the presences in the house are negative, there are limits to what she will live with. Seeing a spirit materialize or seeing something physically move, Judy said, will probably be enough to send her running for the door. Until then, she said, she finds the weird happenings in her house fascinating and doesn’t mind a little (creepy) company.

Brookhaven residents looking to recycle can still pick up containers at the city barn, according to Brookhaven Recycles volunteer Linda Moak.... read more