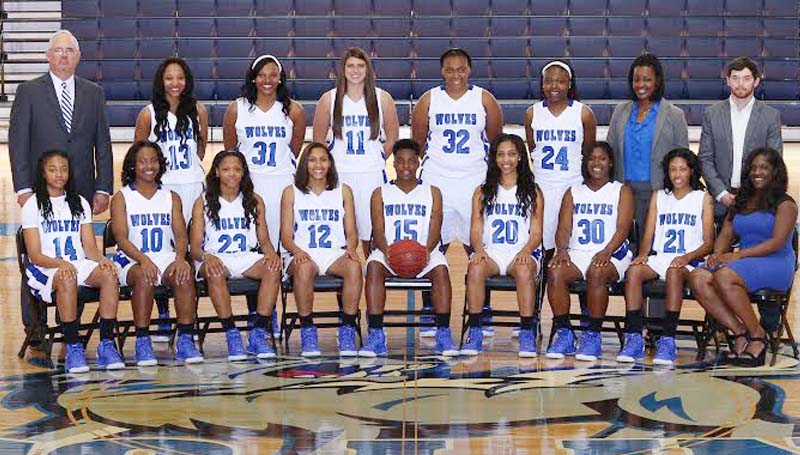 Co-Lin Media / Natalie Davis / The Co-Lin Lady Wolves are ready to start the 2015-16 basketball season as they host Holmes Monday at Mullen Gymnasium. The women tip off at 6 p.m., followed by the men at 8 p.m.

WESSON – The 2014-2015 season was a memorable one for the Co-Lin Lady Wolves as they captured the MACJC South Division title and the MACJC State Championship in front of their home fans in Mullen Gymnasium. The Lady Wolves finished the regular season undefeated with a 23-0 record and were ranked No. 16 in the final NJCAA regular season poll. Overall, they finished the season with a 27-1 overall record. Their only loss coming in the semifinals of the NJCAA Region 23 Tournament.

This was the second State Championship in the last four years for the Lady Wolves and head coach Gwyn Young’s eighth title in his illustrious coaching career.

Looking to the 2015-2016 season, the Lady Wolves will have to replace NJCAA All-Region 23 and MACJC First Team All-State guard Claresa Banks, who is currently playing at Troy University. Banks led Co-Lin in scoring for the entire season until going down with a season ending knee injury in the second to last regular season game. She finished the season averaging 12.8 points, 4.9 rebounds, 2.7 assists, 2.6 steals, and 1.5 blocks per game.

Allen averaged 10.5 points, 7.1 rebounds, 1.3 steals, and 1.3 blocks per game while coming off the bench in 20 of 28 games for Co-Lin. She posted six double doubles her freshman year and was named MACJC Second Team All-State.

Sanders and Hinkson saw significant playing time after starters Banks and Lumpkin went down with knee injuries in the latter half of the regular season.

Sanders was action in 27 games as a freshman averaging 8.5 points per game. She averaged 23.3 minutes per game and scored a season-high 15 points in a wins over Hinds and Gulf Coast.

Hinkson played in 24 games for the Lady Wolves as a freshman. She averaged 5.0 points and 2.1 rebounds per game and scored a season high 18 points in a win over Hinds.

Keyes saw limited action as a freshman due to knee surgery. She averaged 3.9 points and 2.2 rebounds in 10 appearances.

Hall, a Meridian Community College transfer, helped lead the Lady Eagles to a 17-11 record. The Lady Eagles were the MACJC State Tournament Runners-Up and made an appearance in the Region 23 Tournament. She was the second leading scorer for Meridian her freshman year averaging 14.2 points and 6.1 rebounds per game. Hall was named MACJC Second Team All-State.

Joining this group of sophomores are a talented group of freshmen including forwards Andreal Fleming of Canton, and Debraia Bell of Jackson (Jim Hill High School), and Dionnika Moore of Midfield, Alabama (Midfield High School).

Fleming, a transfer from Northwestern State University (LA), was recruited by Co-Lin following her senior campaign at Canton High School. She averaged 12.3 points and 8.4 rebounds per game as a senior. Fleming was instrumental in Canton High School’s 2013 State Championship and 2014 semifinal appearance.

Moore played for Coach Charles Thomas as Midfield High School in Midfield, Alabama. As a senior, she averaged 12 points and 6.4 rebounds per game for the Lady Patriots. Moore was selected 2015 All-Metro Honorable Mention, AHSAA Area All-Tournament and AHSAA Regional All-Tournament.

As a senior, Cohen averaged 17 points, 7 rebounds, and 3.6 assists per game for Coach Nikki Jones and the Natchitoches Central Lady Chiefs. She was selected to play in the LHSAA All-Star Game, LHSAA Class 5A Second Team All-State, and First Team All-District.

Martin averaged 21.1 points and 3.7 rebounds for the Lady Jaguars of North Pike High School. She was selected to play in the 2015 Mississippi/Alabama All-Star Game and was an All-District performer.

A Hazlehurst High School product, Davis averaged 12.5 points, 4.4 rebounds, and 3 steals per game for the Lady Indians. She was selected to The Clarion-Ledger’s Honorable Mention Team, Player of the Year by MaxPreps, and one of the Top Performers by The Clarion-Ledger in February.

Coach Gwyn Young begins his 40th season as the head coach of the Lady Wolves. He has a career record of 864 wins and 244 losses, eight MACJC state titles, seven NJCAA Region 23 titles and has been Region 23 Runners-Up nine times. His teams have made six seven NJCAA National Tournament appearances with his 1989 team finishing a school best fourth in the nation. Coach Young is the second winningest active coach in the NJCAA and was inducted into the NJCAA Women’s Basketball Hall of Fame in 2013.

WESSON – With a veteran group of sophomores, the Co-Lin Wolves are excited about the possibilities in 2015-2016. After coming... read more