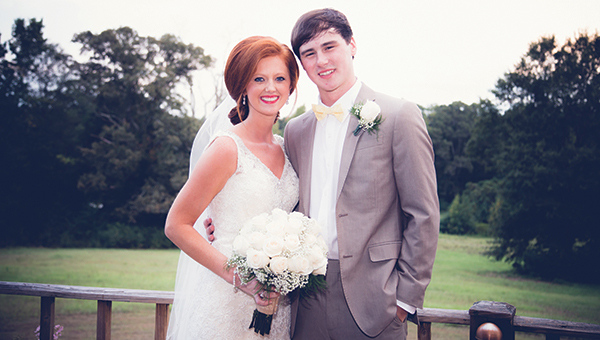 Maggie Redd of Bogue Chitto and Grant Brister of Jayess were united in marriage on Saturday, Sept. 5, 2015, at 6 p.m. at Jolimar Summit.

The bride is the daughter of Byron and Renea Redd, of Bogue Chitto. She is the granddaughter of Wayne and Beth Sasser and W.M. and Karen Redd.

The groom is the son of Curt and Belinda Brister. He is the grandson of Jerry and Betty King, Betty Magers and the late Clayton Brister.

He is a 2013 graduate of Enterprise Attendance Center and attended Copiah-Lincoln Community College. He is currently a youth minister at Sylvarena Baptist Church.

The bride wore an antique white lace covered gown featuring crystal beading edging and a V-neckline with a fit and flair bodice accented with a one tier, beaded edge veil. The bride carried a bouquet of white roses, baby’s breath and greenery wrapped in burlap with her initials monogrammed in blue for her “something blue.”

Serving as maid of honor was Christine Miller and matron of honor was Bailey Brister Raiford, sister of the groom. Bridesmaids were Micah Redd, cousin of the bride, Hannah Smith, Kaitlyn Rhoad, Natalie Smith, Katie Wood and Lindsay Wood.

Flower girls were Mary Grace Everett and Taegan Everett, cousins of the groom.

The attendants wore the bridesmaids wore a one shouldered buttercup yellow tea length dress accented with pearl earrings, a gift from the bride. The bridesmaids carried a bouquet of mixed coral and yellow flowers including roses, orchids, baby’s breath and greenery.

Ring bearers was Slayden and Clay Brister, nephews of the groom.

The couple resides in Brookhaven and have planned a late honeymoon to the Bahamas.

Allison Gray Boyd and Derrick Tyler Layton were united in marriage on Aug. 1, 2015 at Redeemer Presbyterian Church in... read more