Sheriff easily elected to another term 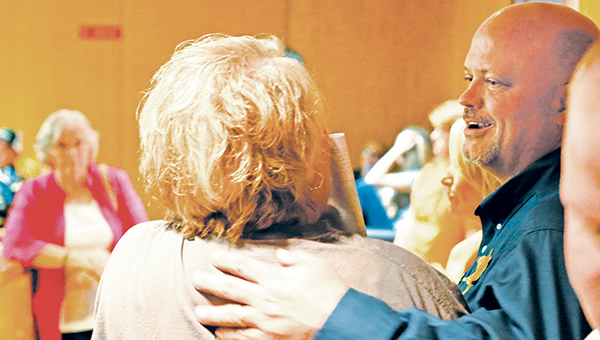 Photo by Kaitlin Mullins
Steve Rushing (R) talks with a supporter Tuesday night after election results showed he has been re-elected to serve a third term as Lincoln County sheriff.

Come January, there won’t be a new sheriff in town as Lincoln County re-elected Steve Rushing in Tuesday’s election.

Republican Rushing defeated Democrat John Wayne Leggett; Rushing had 6,170 votes (59.12 percent) while Leggett finished with 4,263 votes (40.85 percent) in unofficial numbers. This will be Rushing’s third term, serving as sheriff for eight years and working in the Lincoln County Sheriff’s Department for 19 years.

Rushing said there is much work to be done to build upon what has already been achieved within the county and the LCSD, and he is excited and grateful for the opportunity to do that work.

“We got a lot of work to do — and hopefully we can all come together and work together to do what’s best for the citizens of Lincoln County,” Rushing said. “I’m very, very grateful.”

Rushing earned a criminal justice degree from University of Southern Mississippi and since then has continued his education and training. Rushing graduated the National Sheriff’s Institute where he was taught administrative skills along with sheriffs from all over the nation. He has also graduated FBI Command College, an executive level training for sheriffs and police chiefs across the state, among several other classes.

Rushing served as president of the Mississippi Sheriff’s Association in 2012. President of MSA is an elected position among the 82 counties, chosen by the sheriffs. Rushing serves on the legislative committee within the MSA, and has been active in Jackson this past year working to solve issues facing sheriff’s offices’ all over the state.

Rushing and his wife, Cassandra, have three children and are active members at Pleasant Grove Baptist Church, where Rushing is a deacon.

The position of sheriff is a multi-faceted one, and sheriffs are tasked with keeping the peace within the county amongst a host of administrative and law enforcement duties. The sheriff is the head of the Sheriff’s Office, whose deputies respond to calls for emergency service, enforce local ordinances and state and federal laws and maintain a sense of tranquility by visibility in communities they patrol.

The sheriff is over the county jail, all officers and their training, and is responsible for the budget of the office’s estimated expenses. Office administration, criminal investigations, court services, dispatch and patrol, detention centers, law enforcement training and animal control are elements that fall under the sheriff’s responsibilities.