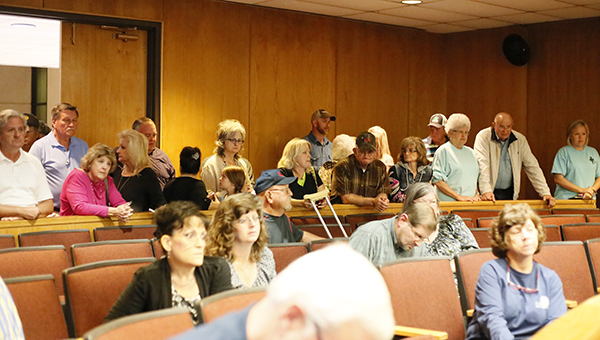 Photo by Kaitlin Mullins
A crowd anxiously waits for election results Tuesday night at the Brookhaven-Lincoln County Government Complex. Citizens were glued to a monitor displaying numbers as they were entered from each ballot box, and many appreciated the swift information.

Statewide, turnout was reported as “steady” but hard numbers weren’t yet available. Bairfield reported no problems during Tuesday’s election.

“We had a very smooth operation day that day to be our first large election,” Bairfield said.

Bairfield said since he took office he has purged the voting records to make sure those who have died or moved out of the county are no longer included, which shows a more accurate turnout rate.

Bairfield said it helped to have the electronic poll books, so that each precinct could help direct people to the appropriate precinct. Normally, the courthouse has a line for these types of  questions, but there were substantially fewer people this year.

“It saved tons of people from coming up here,” he said.

Bairfield also said he has received positive feedback for having television monitors set up in the courtroom and in the lobby for people to see live results.

“We had the results posted by 9,” Bairfield said. “Poll watchers were just getting the numbers about the same time. That’s major kudos to our poll workers. That means we had some pretty good poll workers to get the results at the same time if not before — that spoke volumes of our country.”

A look at precinct numbers

• In the race for Tax Assessor/Collector, incumbent Rita Goss was unseated by Republican Blake Pickering by a hefty margin — 6,201 to 4,197 votes in unofficial returns. At the precinct level, voters at Alexander overwhelmingly went for Goss, 230-15 votes. The Government Complex box also went for Goss, 196-20. Others, however, were just as lopsided for Pickering. Halbert Heights supported Pickering by a 389-73 margin. He also easily won Enterprise, Loyd Star, Old Red Star and Zetus.

• Republican Sheriff Steve Rushing was easily re-elected to another term, defeating Democrat John Wayne Leggett 6,170 to 4,263 votes. Leggett won 11 precincts, but Rushing took home the most votes at the remaining 20. His biggest margin of victory was at Halbert Heights.

• In House District 53, longtime Democratic leader Bobby Moak was defeated by Republican Vince Mangold 4,322 to 3,432 votes in unofficial returns. In Lincoln County, Mangold squeezed by Moak by just 45 votes. Mangold cleaned up at Enterprise, besting Moak 523-193. Moak’s best box was at Alexander, where he won 239-7.

The suspect in Monday’s murder is still at large as investigations into Monday’s string of crimes continue. Police Chief Bobby... read more