Panthers roar back to beat Natchez 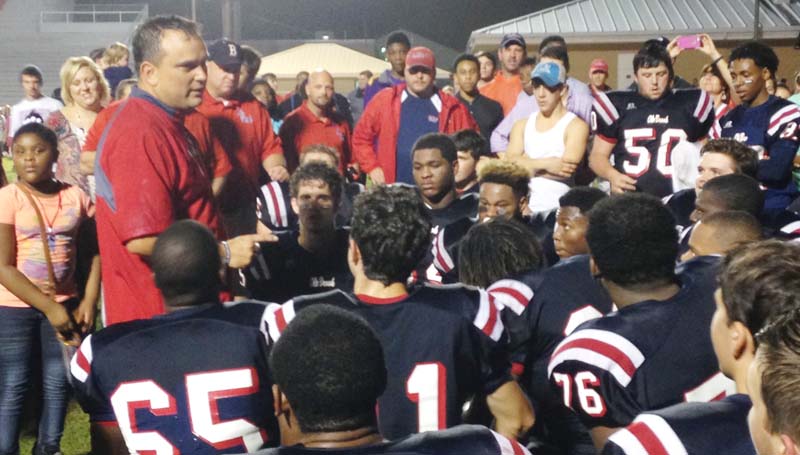 Daily Leader / Marty Albright / Brookhaven head coach Tommy Clopton talks to his players during a team huddle after the game to congratulate them on a job well done Friday night.

Brookhaven junior cornerback Kenneth Bellamy’s key interception late in the third provided the momentum boost needed for the Panthers to outscore Natchez 14-0 in the final two periods to beat the Bulldogs 31-20 Friday night at King Field.

With the win, the Panthers (4-7, 4-3) clinched the No. 3 seed in Region 3-5A to make the Class 5A state playoffs. Brookhaven will travel in the opening round to Pascagoula in a battle between Panthers.

“I can’t explain how proud I am of our players and coaches,” said BHS coach Tommy Clopton. “They have battled through some tough times and found a way to get in the playoffs. I thought our defense played a heckuva ballgame and kept us in it until we found a way to make plays offensively. In the second half I thought we played great team ball and took control of the game.”

The Bulldogs jumped on the Panthers early in the first period as Ernest Woods punched in a 5-yard rushing touchdown with 7:56 remaining. Shamarra Grover finished 2-of-3 on the extra point kicks for Natchez.

On the following kickoff, Brookhaven quickly answered the Bulldogs’ challenge with a 95-yard return for a touchdown by Tyriq Reese with 7:40 left. Tyler Mixon nailed the extra point to tie the game at 7-7. Mixon finished with a perfect 4-of-4 on the night in extra point attempts.

Natchez responded with another quick strike to reclaim the lead when sophomore quarterback Chris Scott connected with senior receiver Travez Lyles for a 34-yard touchdown with 6:50 left.

With the Bulldogs leading 14-7, the light rain turn into a downpour, forcing both teams to run the ball the rest of the period on a soggy field.

In the second quarter, the Panthers opened with a quick score to tie the game again at 14-14 when sophomore running Damarrell “Duke” Leggett sprinted in a 16-yard rushing touchdown with 10:26 left. 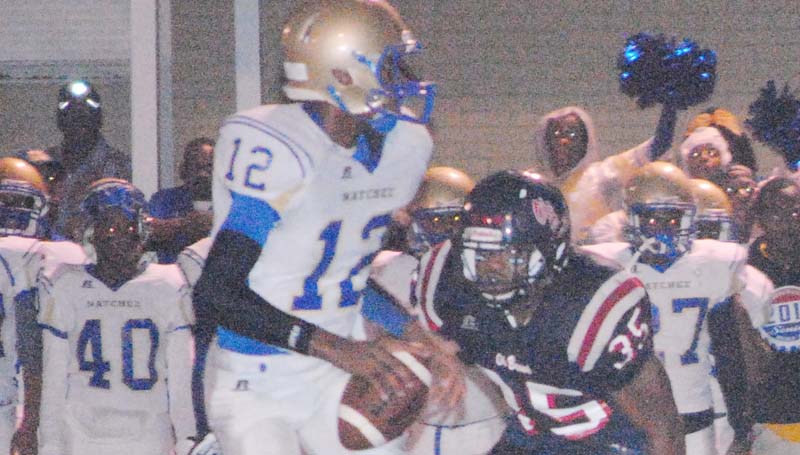 Natchez answered Brookhaven’s score with a score of its own to reclaim the lead at 20-14 when junior runningback Tydarrius Terrell broke free to cash in a 23-yard rushing touchdown with 8:07 remaining.

Natchez carried a 20-14 lead into halftime.

Late in the third quarter, the Panthers’ offense managed to put together a long drive to cut into Natchez’s lead at 20-17 after sophomore kicker Tyler Mixon nailed a 23-yard field goal with 3:52 remaining.

On the next offensive possession, Natchez quarterback Chris Scott attempted a pass, but it was picked off by Brookhaven’s Bellamy, and he returned it to the Bulldogs’ 13-yard line.

Brookhaven’s offense quickly turned the interception into points as freshman quarterback Sevante Quinn hit senior receiver Darrian Wilson in the endzone for a 13-yard strike to put the Panthers up 24-20 with 3:23 left.

In the final period, Brookhaven pounded the ball down the field and scored their final touchdown of the night on a 2-yard run by Reese to extend their lead to 31-20 with 10:24 left.

“This was a tough battle for both teams,” said Natchez coach Henry Gardner. “Both teams fought hard until the very end. Our guys came out strong in the first half against Brookhaven, but we just could not continue it in the second half. Brookhaven did a good job making the big plays at the end to secure the win.”

Quinn completed 3-of-5 passes for 21 yards, one touchdown and three interceptions. He also rushed for 34 yards on nine carries.

Wilson was the top receiver for the Panthers with one catch for a 13-yard touchdown. Reese caught two passes for eight yards.

For Natchez, Scott led the Bulldogs completing 8-of-16 passes for 92 yards, one touchdown and one interception.

Terrell led the ground attack for the Bulldogs with 19 rushes for 64 yards. Lyles was the leading receiver with two catches for 46 yards.

The Natchez Bulldogs (4-6, 3-4) captured the fourth and final playoff spot in Region 3-5A. They will travel to play Pearl River Central in the opening round of the Class 5A playoffs. 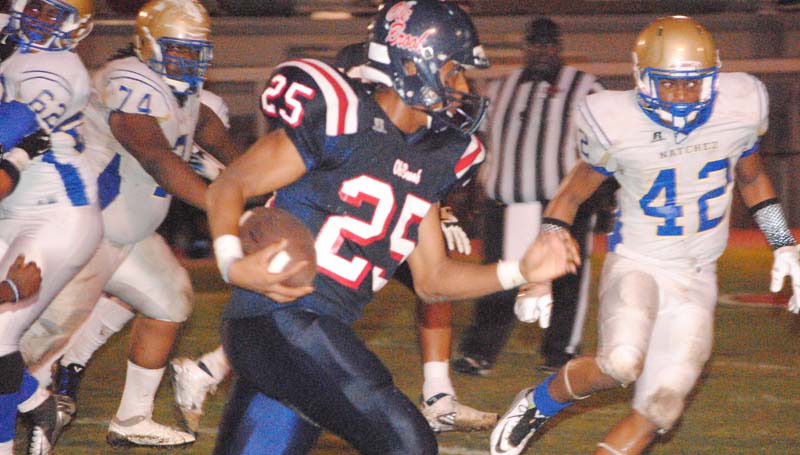