TRAIN SAFETY 101: STAY OFF THE TRACKS 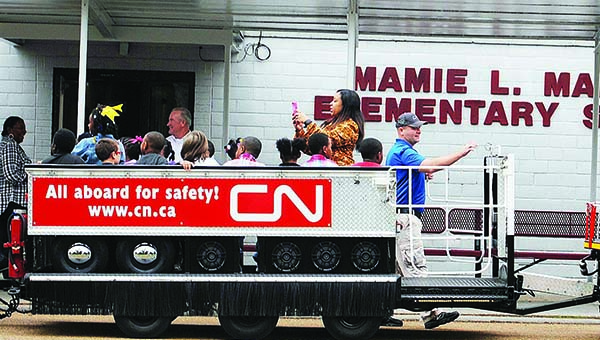 Someone is hit by a train in the United States roughly every three hours, according to Operation Lifesaver, a non-profit dedicated to educating children about rail safety. In Mississippi last year, two died and 13 were injured as a result of crossing collisions.

As a part of Operation Lifesaver, representatives from Canadian National went to Mamie Martin Elementary School Monday to give presentations to the children on rail safety.

“We figure if we target K-6, that’s a good target area,” Coordinator of U.S. Operations Mark A. Schmale said. “It’ll stay with them, and they can go home and tell their parents. That works, too. We’re trying to educate them at an early age, to let them know just how dangerous things can be.”

Students at Mamie Martin were wowed by Little Obie, a bright red miniature locomotive on wheels. After presentations were over, the students were given a chance to take a short train ride.

“Wherever Little Obie and its crew go, the message is the same,” promotional material for the train said. “Please be careful and safe around trains and railroad crossings. Look, listen and live.”

Schmale said the best thing to teach children is to stay off the tracks completely, but parents need to be careful, too.

When Operation Lifesaver began in 1972 there were 12,000 collisions annually on railroad crossings in the United States, according to the group. That number has dropped to just 2,287 in 2014.

“If we can keep one of them from getting hurt, it’s worth all the time and energy we spend,” Schmale said. “The CN railroad takes this really seriously. We put a lot into the program.”

One dead, two face serious injuries after wreck on MS 583

A two-car accident in Lincoln County Sunday night has left one dead and two with serious or life-threatening injuries. Mississippi... read more