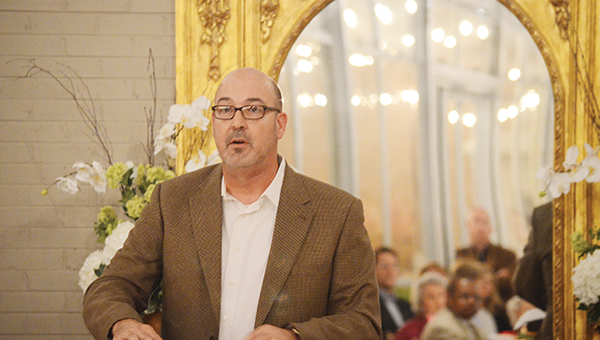 The Brookhaven-Lincoln County Chamber of Commerce Annual Membership Celebration at Ole Towne Church Tuesday night went off without a hitch despite the forecast for inclement weather.

The Chamber recognized those who have strived to further local business, industry and education and announced its new president.

Outgoing Chamber President Stan Patrick addressed the packed house about the achievements and successes of the past year. He passed the gavel to a new Chamber president, Mike Whatley of Mike Whatley Honda.

Patrick cited the new Tourism Council and its marketing accomplishments, a new city of Brookhaven logo and website, as a highlight of the year. Patrick said not only has 2015 been the best year financially for the Chamber, but two of its largest events, Girl’s Night Out and the Ole Brook Festival, were both record-breaking in attendance and participation.

“Being at the Annual Chamber Celebration reinforces why I am so proud to live in Brookhaven,” said Kay Burton, chamber program director. “Brookhaven is well-known for unparalleled natural beauty and quality of life and is a place of momentum. Momentum happens when community comes together to promote the ideals and opportunities for the future. Last night, we honored those who have made a difference in our community.”

“Where would we be without our teachers?” Patrick said, before announcing the Educators of the Year. LaTronda Gayten, Crystal White, Dawn Freeman and Laura Lofton were honored and presented with gifts as this year’s educator honorees.

Hurst Review Services was named Small Business of the Year, though, Patrick noted, it has grown to not be so small anymore. In the agriculture sector, Agribusiness of the Year was awarded to Farmbelt Equipment.

The Soapbox Award is one that isn’t given every year but rather is awarded only when warranted by someone’s exceptional service to the city of Brookhaven and embodiment of the Chamber and its goals. This year, the award was presented to Pam Cartwright, longtime office manager at the Chamber who for decades has kept things running smoothly as well as been an integral part of the Chamber’s events.

The Chamber Ambassador of the Year is voted on by the ambassadors, and this year’s red-coated honoree was Brenda Henderson. She was thanked for her tireless, enthusiastic service and dedication to the chamber and the city of Brookhaven.

Henderson, Donny Mitchell, Bernie Reed and Dustin Walker, all outgoing Chamber of Commerce board members, were thanked for their service and the newly crowned Miss Merry Christmas Morgan Wallis, 17, made her first public appearance at the meeting.

BSD superintendent to step down: Leader of city schools resigns effective in June