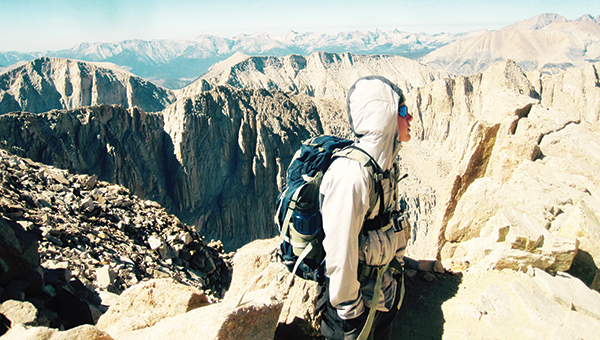 Photo submitted /
Above, Haddon Smith climbs to the top of Mt. Whitney in California for his 13-year-old challenge. Miranda and Kirk Smith (pictured below) like to take what some might call an “outside of the box” approach to parenting. Their coming-of-age challenge is a unique idea the Smiths cherish for their children.

Except for maybe the idea of a Sweet 16 party, adolescents in the United States don’t look forward to a shared cultural rite of passage signaling the transition to adulthood. Active Brookhavenites Kirk and Miranda Smith decided their children would have something special to punctuate growing up — a coming of age challenge.

“In the old days there was a demarcation point that says ‘You’re not a kid anymore.’ We really don’t have that in modern society,” Kirk said. “We wanted something like that, something that’s a real challenge. So we said when they turn 13, they pick the mountain, and we’ll guide them up it.”

So when their daughter Saylor turned 13 two years ago, up California’s Mt. Whitney they went. After several days of camping and climbing, hard work and 14,505 feet, Saylor saw what few people get to see — the beautiful view from the highest summit in the contiguous U.S. and the Sierra Nevada. Kirk said the challenge, other than being a cool thing to do, has benefits that are important at that stage of life.

“A sense of accomplishment and a sense of responsibility, and the confidence to know that they can complete a large task set before them and they can do it on their own,” Kirk said. “It’s a confidence builder.”

Her brother Haddon Smith recently completed his 13-year-old challenge with flying colors — an impressive three-day feat with a heavy pack and an altitude that affects everyone differently. The family worked together toward the common goal of the summit, all pitching in to set up camp, light the stove and filter water. Miranda said they try to find something to climb everywhere they go.

“I want my kids to know there’s this whole big world out there,” Miranda said. “Just because you live in a small town doesn’t mean that you can’t do these great things.”

Miranda and Kirk said this character-building experience is something they hope their children carry with them forever, and possibly even pass on to their kids. And while it isn’t the typical family trip, the bonding experience that comes with climbing is a meaningful way the Smiths spend time together.

“With our family, it’s something we’re all doing together and working together toward a common goal, all helping each other — it just strengthens our family so much,” Miranda said. “The hope is, God willing, we’ll do the same with our grandchildren one day and be able to say ‘We did this with your mom and dad.’ And that they will appreciate that they worked really, really hard, but you get to see something that not that many people have seen. That’s very special.”

City sales tax up in Sept./Oct.

Brookhaven’s sales tax revenues for September and October show some positive growth, especially when compared regionally. According to the Mississippi... read more