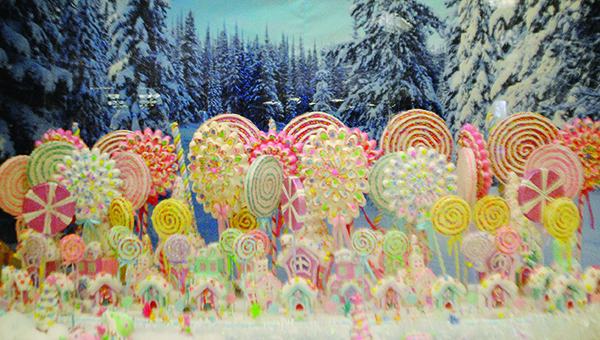 Photo by Aaron Paden / A giant snow globe containing a miniature village surrounded by a forest of candy canes sits in the Lincoln County Public Library.

There is currently a giant inflatable snow globe in the Lincoln County Public Library. This globe is the main attraction of the library’s annual Christmas Tree Village.

Maxine Allen usually crafts the Christmas village, but Children’s Librarian Kasie Eckman said Allen took a break this year, so Gail Garbo was given the chance to show off her miniature village-building skills.

The result was a giant inflatable snow globe. Inside it, a model village sits among a forest of candy canes.

“I was going for a whimsical candy land village,” Garbo said. “If you look at the village, they look like they’re made of candy.”

Garbo couldn’t remember the name of the movie where she got the idea to build a giant snow globe — she suggested it was perhaps “Nativity!” or its sequel — but she does remember the scene where it happened.

“They actually had people inside the snow globes. They were singing and dancing,” Garbo said. “I thought it would be so cool to do a village inside it because I do villages. So I just went on the Internet and started searching. I bought it off of eBay.”

“It was rolled up like a carpet when we brought it in,” Garbo said.

After inflating the top of the globe with an air blower than runs constantly, Garbo was able to go inside and place the props. Most are made of styrofoam. While some come from Hobby Lobby, Garbo said some she carved herself.

“I’m a village person,” Garbo said. “I don’t know if you know village people, but we love to carve and do our villages and put them out throughout the year. I do a lot of carving, a lot of mountains, a lot of water displays and things like that.”

Eckman said it’s also an opportunity for local businesses to put up decorations. The library and Chamber of Commerce start sending out notices around Halloween.

“It can be a themed tree, and we actually like that, because it shows what they’re about,” Eckman said.

Eckman said they haven’t gotten many trees this year because they’ve been renovating, but she hopes to get a few more before Christmas.

Eckman said there will also be a Christmas event at the library on Dec. 3, the day of the Christmas Parade. The event will start at 5:30 p.m. and last until 6:30 p.m., just in time for people to go to the parade at 7.

“We’ll have cookies, and punch. We’ll paint noses like Rudolph,” Eckman said. “We’re going to decorate some ornaments, just to have a fun time and get people together before the parade for about an hour. Just a social. We hope to see a lot of people come in and enjoy everything they have for the season.”

The temperature was 50 degrees and falling fast last week when Flight 5270 finally landed, depositing me and a dozen... read more