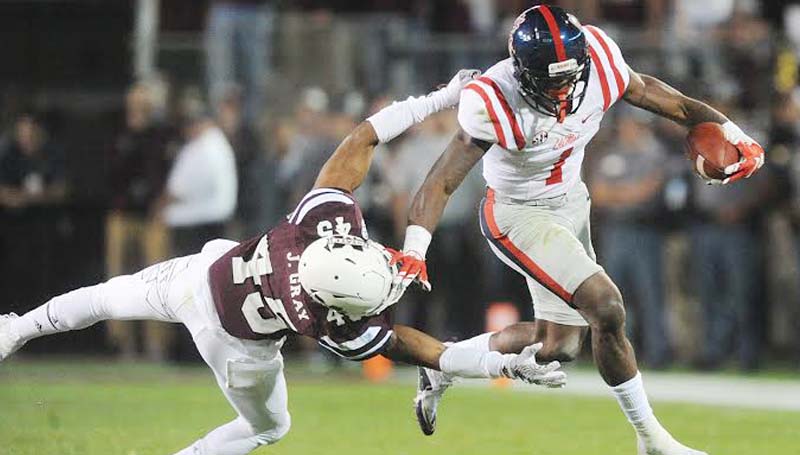 STARKVILLE – Chad Kelly threw for 236 yards and two touchdowns and ran for another score to lead No. 19 Mississippi over No. 23 Mississippi State 38-27 on Saturday night.

Ole Miss (9-3, 6-2 Southeastern Conference, No. 18 CFP) jumped out to a 28-3 halftime lead and was never in serious trouble during the second half. Kelly threw two touchdown passes – both to Damore’ea Stringfellow – and ran for another while Tony Bridges returned an interception 45 yards for a touchdown.

It’s just the second time the road team has won the Egg Bowl in 12 years. 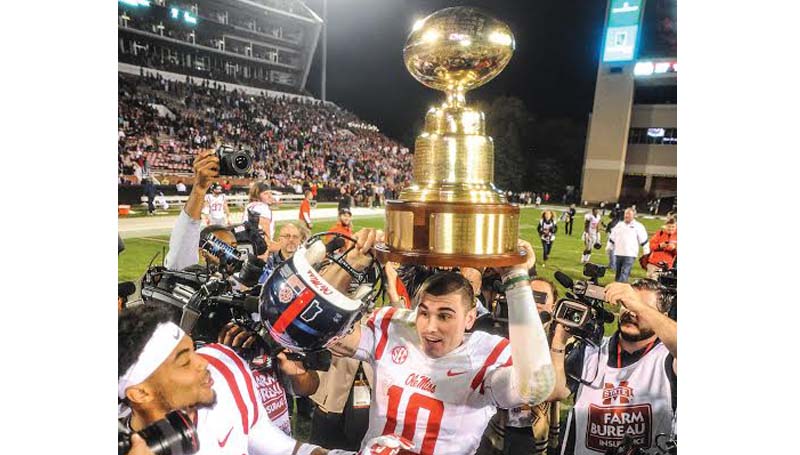 Prescott completed 31 of 42 passes for 254 yards and two touchdowns, but was sacked seven times and rarely looked comfortable in the pocket.

It’s the first time the Rebels have won in Starkville since 2003 when Eli Manning was in his senior season.

Ole Miss found out about five minutes before the start of the game that it would not play for an SEC championship. No. 2 Alabama clinched the Western Division title instead with a 29-13 win over Auburn in the Iron Bowl.

But there was no early letdown for the Rebels, who stunned the home crowd with three quick touchdowns to take a 21-0 lead by the end of the first quarter.

Kelly was spectacular as Ole Miss built its lead, running for a 27-yard touchdown and then finding Stringfellow in the corner of the end zone for a 2-yard touchdown. Kelly, a Buffalo, New York, native, said he had never heard a cowbell before Saturday, but didn’t seem to mind the early raucous atmosphere, calmly leading the Rebels on productive drives.

Bridges scored the Rebels’ third touchdown, stepping in front of a Mississippi State receiver and returning the interception down the left sideline untouched. Prescott was hit hard as he threw – which was a common theme throughout the game.

Ole Miss slowed down a little in the second quarter, but not much. Kelly found Stringfellow again over the middle for a 36-yard touchdown and the Rebels took a 28-3 lead into halftime.

Mississippi State briefly made things interesting with 10 straight points to start the third quarter but Ole Miss responded with a 48-yard field goal from Gary Wunderlich to push its lead to 31-13 at the end of the third quarter.

Jordan Wilkins’ 38-yard touchdown run early in the fourth quarter sealed the win for the Rebels.

Kelly completed 21 of 30 passes and ran for 74 yards. Jaylen Walton ran for a team-high 93 yards.