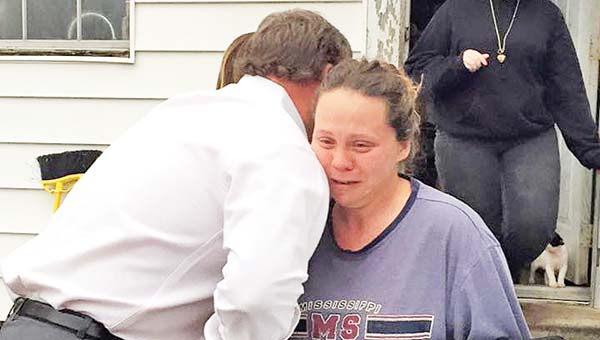 Reed’s Metals of Brookhaven gave away a free metal roof on Tuesday to a surprised Silver Creek family through a Christmastime project called “Covering the Community.”

Sara Armstrong was the proud recipient among hundreds of submissions. She was completely surprised when six vehicles, including Silver Creek Mayor Elizabeth Turnage, pulled up with a framed certificate and a large crowd of people gathered at her doorsteps.

“I am still in total shock. This has completely changed our whole life.” Armstrong said. “I always felt like I was trying to dig a hole in cement, with a toothpick, but I will never give up. Thank you so much, Reed’s Metals. This is so much more than just a roof to my family. It’s a chance for us to live, grow and prosper.”

The blessing, Armstrong said, is worth more than any material value. Armstrong said now the floors can be fixed, and they will be able to use the entire house.

“No more dreading the rain,” Armstrong said. “This is the stuff our country is made of – Reed’s Metals. Life is now manageable for me again. I won’t squander the chance, and in time I will find a way to give back, too.”

Armstrong said Calvary Baptist Church in Silver Creek entered her in the giveaway. In the message to Reed’s Metals from Greg Hartzog of Calvary Baptist Church, Hartzog stated Armstrong has three children ages 3 to 16 years old. Hartzog said Armstrong isn’t the type of person to ask for help but is very grateful when someone does, and her leaky roof could use some help. Reed’s Metals employees are donating their time to install Armstrong’s new roof on an upcoming Saturday in December.

Reed’s named the giveaway project “Covering the Community” in an effort to show their appreciation to a community who has supported them for 17 years, said Reed’s Metals Marketing and PR Director Jessica Brezeale. She said Reed’s employees read through hundreds of entries and had the difficult task of selecting a winner.

“It was hard to hold back the tears as we showed up and told Sara she was the recipient of Reed’s Metals’ Covering the Community,” said Bernie Reed, owner of Reed’s Metals. “I am so proud of my employees because they are volunteering their Saturday to install the roof for free. Seeing tears of joy roll down her cheeks, I am not sure who was blessed more – her or Reed’s Metals.”

Reed’s Metals, now with eight stores across the Southeast United States, began in 1998 out of a portable shed in Lawrence County. Six of the stores will have selected a recipient of a free metal roof this Christmas: Tupelo, Holden, Meridian, Brookhaven, Jackson, Tennessee and Sulphur, Louisiana.

The metal roofing and metal building manufacturer will have given away eight free metal roofs to families in need by the end of the project.

Reed’s Metals plans to make this an annual giveaway event each year at each of its stores. For more information, visit www.facebook.com/ReedsMetals. Submissions will open up again next October or November. 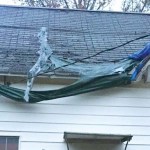 Armstrong said her family will no longer have to dread the rain and will be able to move onto other needs in the house, such as new floors. 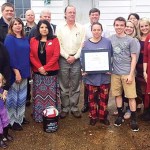 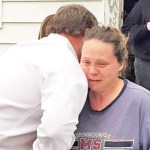 Q: What can done about dark areas or streets in town? Who checks on streetlights, and what if there aren’t... read more