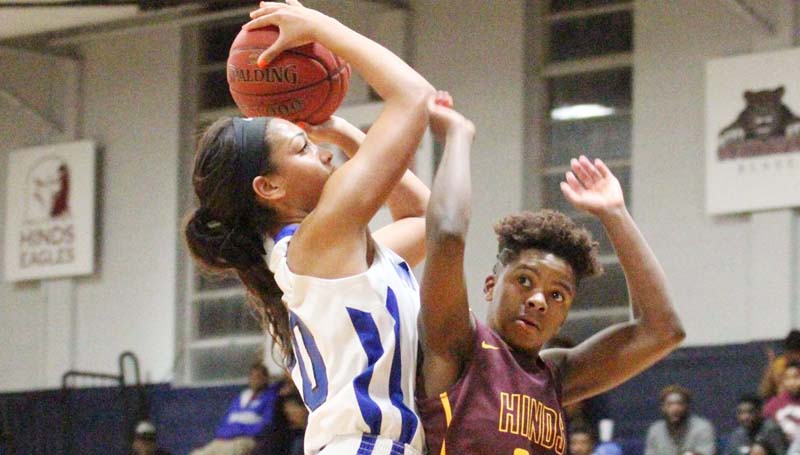 Co-Lin Media / Natalie Davis / Co-Lin’s Princess Cohen scores over Hinds’ Annessia Durham. Cohen had 13 of her game-high 15 points in the first half.

The beginning of the second half looked like the Lady Wolves were going to run away with the game as Alexis Collins hit a 3-pointer to start the half giving the Lady Wolves a 37-20 lead. But the Lady Bulldogs would whittle away at the lead, going on a 9-4 run to pull within six at 44-38 with 9:54 remaining in the game. The Lady Wolves would go on a 6-0 run to increase their lead to 12 at 50-38 with 7:22 left and would hold on to a 58-45 win.

“We started off the game with a lot of energy, but I thought Hinds matched what we had energy wise,” said Lady Wolves head coach Gwyn Young. “I thought they played really tough on defense and knocked us out of what our game plan was with their zone. We finally made a few shots. It’s not really an offense you can run against it, you’ve just got to find open spaces and gaps and try and get into it. I thought our press really helped and we made some good plays. We had way too many turnovers, hopefully we can learn from the game and get better on offense, especially in trying to attack the zone.

For Hinds, Alexia Williams came off the bench to score 13 points. Isheer Davis led on the backboards with 6 rebounds.