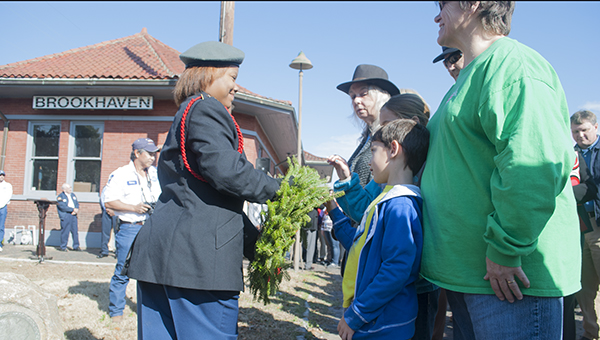 File photo / Last year’s Wreaths Across America ceremony was held at the Old Depot downtown. This year, the ceremony is expected to be larger and will be held at Easthaven Baptist Church.

On Thursday, Brookhaven will have the opportunity to participate in Wreaths Across America, an effort to place wreaths on the graves of veterans.

The Wal-Mart trucks that transport the wreaths across the nation will make a stop at Easthaven Baptist Church at 10 a.m. for a ceremony to thank veterans.

“It’s another way to say thank you, remembering the people that gave the ultimate sacrifice and thank our veterans,” said Rep. Becky Currie, an organizer of the event.

“This convoy is the largest veterans parade in the country,” said Derek Crosby, general transportation manager at Wal-Mart distribution center in Brookhaven and a big contributor to the event. “We’re excited about that and excited about having it come through Brookhaven.”

The program, started in 1992 by William Worcester, began with the placing of a wreath on the Tomb of the Unknown Soldier at Arlington National Cemetery. There was an event in the area of the cemetery where they had some wreaths left over, and they did not want to throw them away. They decided to take the wreaths to The Arlington National Cemetery and honor the Unknown Soldier and as many graves as possible. Some veterans saw them and liked the idea. They wanted to help with the program.

In 2007 the Worcester family, along with veterans and others who helped with the annual Christmas wreath ceremony in Arlington, formed Wreaths Across America to continue expanding this effort. This nonprofit organization continues the Arlington tradition as part of its mission to remember, honor and teach. The ceremony is not only done at Arlington National Cemetery but also at other national and state veterans cemeteries.

State highway patrol escorts Wal-Mart trucks carrying wreaths along their routes to national cemeteries all over the country.

In Brookhaven, the drivers will be performing the Changing of the Wreath, where the driver of the incoming truck takes the wreath from the cab of the truck and hands it to a driver for the wreaths to be delivered to the next location. This year’s driver is Martin Henderson, also a veteran, and he will present wreaths during the ceremony.

This year’s speaker will be Randy Reeves, an Air Force veteran who is currently the executive director of the Mississippi Veteran’s Affairs Board. Other speakers include Sen. Sally Doty, R-Brookhaven and Rep.-elect Vince Mangold, R-Brookhaven. The Mississippi School of the Arts choir will perform and Brookhaven High School color guard will present colors.

“It’s a beautiful ceremony,” Currie said. “I love it. I still feel that Brookhaven is the chosen city, it’s a pretty big deal.”

While the trucks passing through are destined for a national cemetery in Texas, 12,000 wreaths will be taken off to be transported to the Natchez National Cemetery where they will be laid out on Dec 12. Those wanting to participate in placing wreaths may travel to Natchez to take part.

“I’ve talked to so many people who said they were just so blessed to get to do that,” Currie said.

Currie and Crosby said they want to encourage everyone to attend, especially veterans, and they hope the event being inside will draw a large crowd. Lunch will be provided by Wal-Mart and will serve about 300, with veterans being served first. Then the public is welcomed to join.