Orphanage of faith gets funded 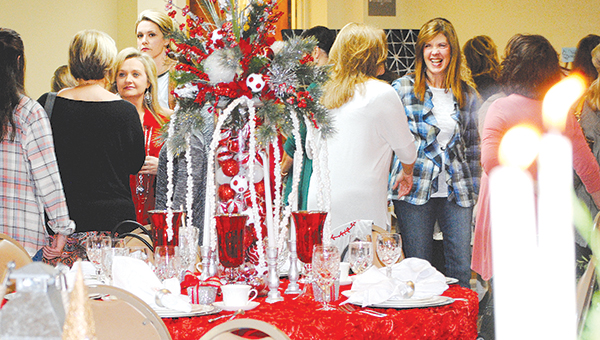 Desserts, shopping, Christmas, Ecuador. One of those words doesn’t seem to fit, but at Monday night’s fundraiser at First Baptist Church, it was a perfect combination. Women came to shop, eat and hear from the founder of Casa de Fe, an orphanage in Shell, Ecuador.

Patti Sue Arnold, once a Brookhaven resident, returned for the fundraiser that benefitted the orphanage. Arnold has dedicated the last 10 years of her life to operating Casa de Fe.

“I went there, because I felt God wanted me to be there, but I didn’t know what I was going to do,” Arnold said. “Truthfully, I thought, ‘Well I can take one foster child.’ And then, ‘I can take another one.’ I just kept taking foster children, and it became what it is. It wasn’t anything I did. It definitely is not me. It’s definitely God. It’s been way beyond my abilities for a long time.”

Arnold said Casa de Fe has taken care of over 350 children in its history, and there are more on the way.

“Right now, there are 42 [children], but I was just notified that a local orphanage that’s only been open three years is closing at the end of the year,” Arnold said. “It looks like we could get as many as 20 kids between now and January.

Arnold said there’s a lot of support in Brookhaven for the orphanage. She returned to town to attend Monday night’s fundraiser at First Baptist Church. The Tis the Season dessert banquet featured a silent auction, and all funds raised will go to the orphanage.

Leah Stewart, who helped organize the fundraiser, said First Baptist has taken mission trips to Casa de Fe, along with other groups in Brookhaven.

“Any church groups are welcome to come,” Stewart said.

As many as 40 percent of the children at Casa de Fe have special needs. Stewart said the budget for Casa de Fe runs at about $42,000 a month, and Arnold said they need extra funds in December.

“We’re looking for help with Christmas,” Arnold said. “We like to try to get $40 per child, so we can buy turkeys and buy gifts, so we can have a nice Christmas for them.”

Locals who want to donate to the orphanage or sponsor a child can do so at lacasadefe.org.