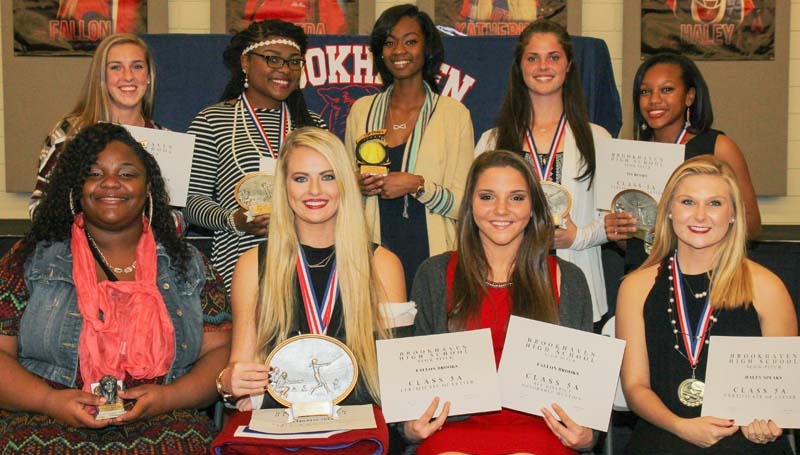 The Brookhaven Lady Panthers gathered for their annual Slow Pitch Awards banquet Wednesday at the FEMA building and a number of awards were presented to the team.

After a dinner served buffet style, BHS head Coach Mandy Vinson announced from the podium how thankful she was to the parents “for letting us work with your girls every day. They worked extremely hard and we are very proud of them.”

“We are blessed to have them coach here at Brookhaven. They are all Brookhaven High softball program alumni and have a passion and love for the program. I think it says a lot when the coaching staff is alumni of the high school. The former players are invested in our program and it shows by people willing to come back and coach within the program.”

After a quick overview of the season, Vinson then recognized the members of the Lady Panther softball team.

All the seniors were also presented with a gift.

“We have enjoyed coaching you all this year and we will miss each one of you,” Vinson said.

Named as Team Captains this year were Katherine Shell and Haley Speaks.

Vinson explained how the BHS softball awards were given out this year.

“At the end of the season, we let the team vote on the awards. These girls work with each other every day. Each one sees the hard work the other puts in day in and day out to get better. We think it’s important for the girls to have some ownership in the program.”

The Hustle Award:  “The Hustle Award went to a player that gave 110 percent every time she got on the field,” Vinson said. The award was presented to Kat Wallace.

The MVP and Scholar Award: “Our Most Valuable Player is also our Scholar Athlete with a 94.49 GPA. We moved her to first base and she saved us and made us look good multiple times. She hit .646 and had 18 home runs this year. She was selected to play in the Mississippi North/South All Star game in Newton County where she went 6-7 with four doubles,” said Vinson. The Most Valuable Player and Scholar Award was presented to Katherine Shell. Shell also received a “B” blanket for playing four years of varsity softball.

The last award given out was the Panther Award.  “It is the only award the coaches vote on. The award to us isn’t about ability, but about the love for the game,” said Vinson. “She was full of spirit for the Lady Panther softball team and was our biggest cheerleader. Therefore, the Panther Award went to Dameda Rancifer.”