He is the son of Scott and Kelly Harrison. 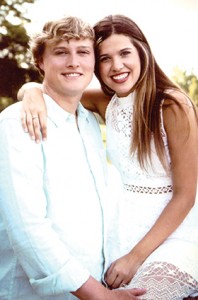 She is the granddaughter of the late Clyde Hiram Walters, Charlotte Walters, of Brandon, and Mr. and Mrs. Don Driskell, of Brookhaven.

He is the grandson of the late Matthew Johnson, Mrs. Lorita Johnson, of Eunice, Louisiana, and Dr. and Mrs. Brent Harrison, of Madison.

The bride-elect is a 2011 graduate of Brookhaven High School. She graduated from Mississippi State University where she received a degree in elementary education. She was a member of Chi Omega Sorority.

The prospective groom is a 2011 graduate of Jackson Preparatory High School. He graduated from Mississippi State University where he received a degree in software engineering. He was a member of Kappa Sigma. He is currently employed with FedEx in Memphis as a technical analyst.

The couple will exchange vows at 4 p.m., Saturday, Jan. 9, 2016, at Ole Towne Church. A reception will immediately follow.