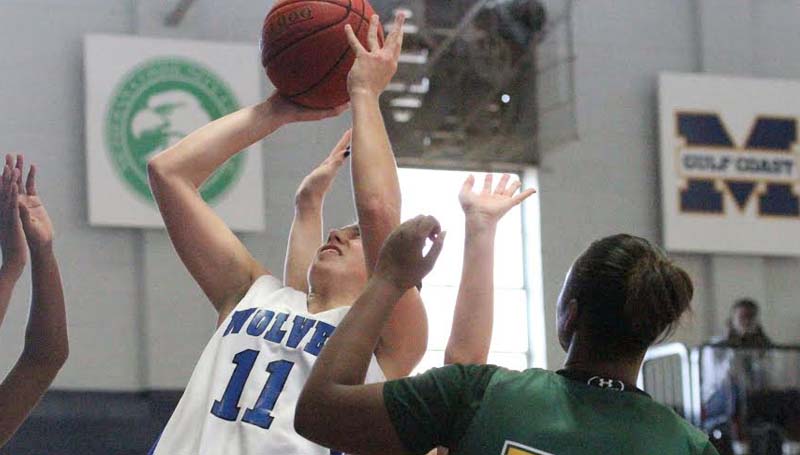 WESSON – The Co-Lin Lady Wolves outscored the Delgado Lady Dolphins 24-7 in the first quarter on their way to a 77-50 win in a non-division contest Saturday afternoon.

Co-Lin (9-0, 2-0) will host Southwest Tennessee Community College in their final game of the semester on Monday at 4 p.m. Listen live at www.colinathletics.com or on WMJU 104.3 FM in Brookhaven.

Delgado only dressed out seven players and were clearly outmanned.

In the third quarter, the Lady Dolphins offense came to life as they outscored Co-Lin 19-17 to close the gap to 59-35, but the deficit was too large to make up. “Coming in one of the things we talked about was just because we beat them the last time doesn’t mean that was going to be the same thing so don’t have a let down,” said Co-Lin head coach Gwyn Young. “We were trying to sub in and we actually backed off in the second half starting out and wasn’t extended our defense to keep the pressure up to try and wear them down more. We made some mistakes, but then made some good plays. I’ve seen 20 point leads with six minutes left go quickly. We wanted to make sure that didn’t happen so we extended our defense back out and we stole it about three times in a row and scored so we knocked it back out in front. It was a good opportunity to give everyone a chance to play.”

Jasmine Mosby was the only Lady Dolphin in double figures with 11 points. Katherine Ward and Marshe’ Ursin led off the boards with 7 rebounds apiece.